Strategic planning at every level of a club, defined by the key principles of the club’s game model and overseen by a key figurehead such as a technical director is fundamental to ensuring players are recruited and developed in line with the club’s specific KPI’s to not only achieve short-term results, but maintain the long-term, sustainable performance of the first team.

In Eredivisie, AZ Alkmaar are one such club who have embraced the application of data within their strategic planning, having started to work with Opta data four years ago.

However the roots of their current playing philosophy date back even further, as the club’s Head of Technical scouting, Koen Veenstra, explains:

“Our philosophy was defined by a working group consisting of the heads of various departments,” says Veenstra.

“They came together around ten years ago and put pen to paper about what the club should look and feel like and how it can achieve its goals. This is a dynamic document, which is evaluated each year and adjusted where needed. Most of it was determined by the internal club culture, since all core AZ beliefs were already defined. It just needed a solid plan with some concrete actions.

“Our football philosophy exists out of dominant dynamic play, with lots of variation, so that we determine what happens next and the opponent doesn’t know our next move. We want possession of the ball, hence we play with aggressive pressing with a well-organised team. We want all of our actions to be delivered with the highest intensity.

“Before data was even integrated, we already had faith in this philosophy. But we also believe strongly in the use of data, so in the current environment our approach is combined. We start with our philosophy and then do the finetuning in our style of play through the use of data.”

The aggregated numbers from AZ’s 2018/19 Eredivisie campaign indicate that the club were successful in implementing this philosophy, enabling them to secure a fourth-place finish in the competition and Europa League qualification. Playing in a 4-3-3, their emphasis on pressing is backed up by the average starting point of their sequences, 48 metres from their own goal line. 23.4% of all their sequences also started in the attacking third, ranking them fifth in Eredivisie.

Their possession-based approach also showed through in their average sequence time (9.7 seconds) and distance gained per sequence (13.5 metres), which ranked them in the league’s top four.

"We use our performance data to convince a potential new signing why he fits within our strategy. It’s something that is part of our unique approach to show players that we have a dedicated plan for them."

Another telling statistic from the campaign was the volume of minutes played by emerging players – seven players aged under 23 appeared in at least 1000 league minutes, five of whom are AZ academy products. These include Guus Til and Teun Koopmeiners, both 21, who are the club’s captain and vice-captain respectively. 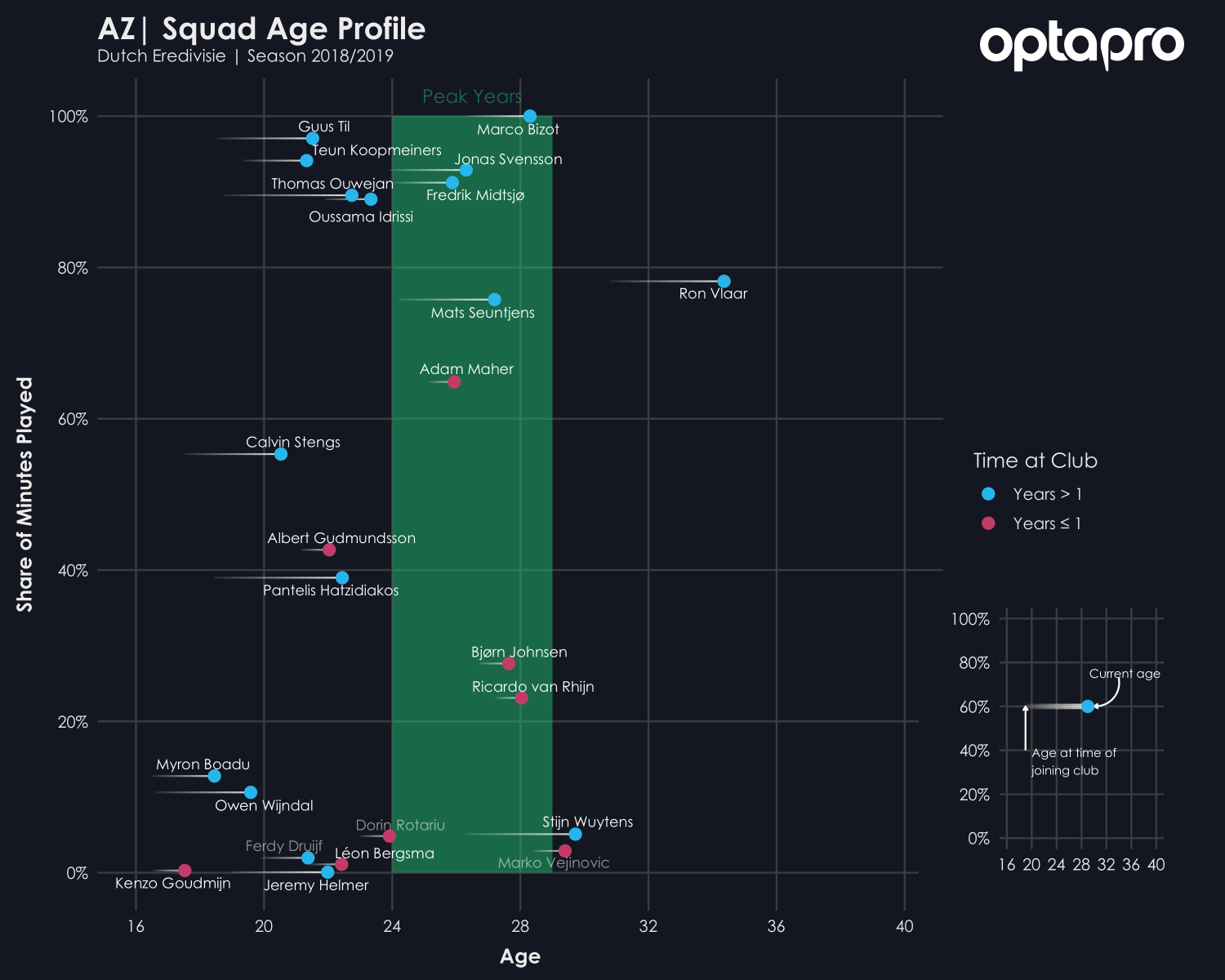 Veenstra believes the involvement of so many players from the youth set-up is down to the processes in place, from the initial recruitment through to every stage of development, which is informed by the club’s philosophy.

He says: “Our goal is to have a quality team, which can compete for a top three spot in the league and do well at European level. We want to achieve this by bringing in players from the Academy, so we have set ourselves the goal of having 50% of our first team squad made-up of youth players.

“We really do believe our philosophy is one of the main reasons players want to play for AZ Alkmaar. But this is a logical outcome. We scout players that fit our philosophy, so it’s most likely that those players can identify themselves with our club and feel comfortable when thinking about joining us. We also use our performance data to convince a potential new signing why he fits within our strategy. It’s something that is part of our unique approach to show players that we have a dedicated plan for them.

“Next to our philosophy we notice that a lot of players are impressed by our new facilities and the attitude of the staff, who are determined to help and develop the players. We believe that these two things combined play a big role in the decision-making part of potential signings.”

In his role as Head of Technical Scouting, Veenstra works closely with the club’s Head of Scouting Carlos Aalbers and the Technical Director Max Huiberts, providing analytically-driven insights to support key recruitment decisions.

Within Dutch football, AZ was an early adopter of analytics to support practices across the club and Veenstra believes that the application of data has strengthened the overall recruitment process, both in relation to the initial player identification and in how the club look to objectify and analyse the subjective reports that come back from Aalbers’ team of scouts.

“Over recent seasons you’ll notice quite a few changes within our recruitment staff and process,” he explains.

“For example we now start the process off with our data analytics to search for players that will improve our current situation. Those players will then be scanned and viewed live in their stadium, so we can judge if they fit our football philosophy.

“For the first-team we’ve created a player profile format per position, which is based on our philosophy. These will be filled out by our scouts, so the players that we recruit will get a rating of the fit with our philosophy.

“We work with a very consistent approach and only recruit players that get a green light in every phase of our recruitment process.

“In addition, if you look at our youth recruitment you’ll see that our key principle of being innovative is being well executed. We do not only recruit players in which our youth scouts see potential, but we also run a couple of tests. We want to know everything about a player: his brain capacity, his physical level, his football history, his mental toughness and so on. In that way we can define an accurate prediction of a player’s potential.”

It is not just AZ’s recruitment department which is benefitting from the wider accessibility of data. Since the start of the 2018/19 campaign, every Eredivisie club is getting access to tracking and event data from every league match as part of a league wide deal, which for AZ offers additional benefits as it allows them to benchmark other players in the league with their own players, something which they have done in-house for a number of years.

“At AZ we strongly believe in the use of data and technology to improve our programme and enhance player performance,” Veenstra points out.

“This goes from measuring physical development of our youngest teams, to intensive monitoring with GPS and questionnaires for our oldest teams. This helps us to create better and more individualised programs for all our players.

“As I’ve already mentioned, our football philosophy features aggressive pressing and high intensity actions. With the use of performance data, this philosophy can be quantified and a benchmark can be made for each position. Individual player performance is analysed and compared to the benchmark to create an objective overview about their current performance and what is required.”

As with every decision made by a club which relates to strategic planning, the wider long-term considerations are something which sit front and centre. For a club like AZ, who are looking to compete for major domestic honours every year against other leading Dutch sides, this means striving to innovate to refine existing processes whilst at the same time ensuring the key principles of the philosophy are being facilitated.

As well as maximising their chances of success, Veenstra thinks this approach gives them a better chance of not only attracting the best players, but also having the next player lined-up when one of their successful products is inevitably targeted by major clubs overseas.

“On the field we want to be a structural leading competitor in the Eredivisie and reach the knock-out stages of the UEFA Europa League, with a style of play which the fans would like to watch,” he explains.

“Off the field we want to stay financially stable and keep innovating within our youth academy, first-team and performance analysis.

“That makes our club philosophy a key factor for us to stand out from others. One thing we see a lot is that players don’t stay that long with one club in the Eredivisie – this makes it crucial for us to maintain a clear vision from top-down, so everyone that needs to replace someone will fit within our culture and philosophy.”

With a proven track record for bringing players through, for club and country, AZ are clearly a club who combine both solid foundations and a progressive approach to ensure they can continue to compete at the top of Dutch football for a long time to come.