A busy summer of youth tournament football has started with the FIFA U20 World Cup now well underway in Poland.

Despite some notable absentees who failed to make it through qualification, including Brazil, Chile, Germany, Spain and the winners of the last event in 2017, England, there is still plenty of emerging talent on show across the 24 nations taking part.

Some players, such as Mexico’s Diego Lainez and Norway’s Erling Haland (profiled here in an earlier blog) have already been involved in moves abroad, whilst a number of others have been enjoying domestic breakthroughs at their clubs during the past 12 months.

With the group stages now fast approaching their conclusion, OptaPro has profiled four players taking part who broke through during the last campaign, who have the potential to make a significant impact during the remainder of the tournament.

Operating in the hole behind two strikers, Sarpreet Singh featured in all but one of Wellington Phoenix’s matches during 2018/19, clocking up 2028 on-field minutes.

The 20-year-old first broke into the Wellington side during the final weeks of 2017/18, scoring four goals in their last eight games. He then went on to score another five goals in the following campaign (exceeding his xG of 3.8), in addition to providing eight assists, which ranked him second in the A-League. 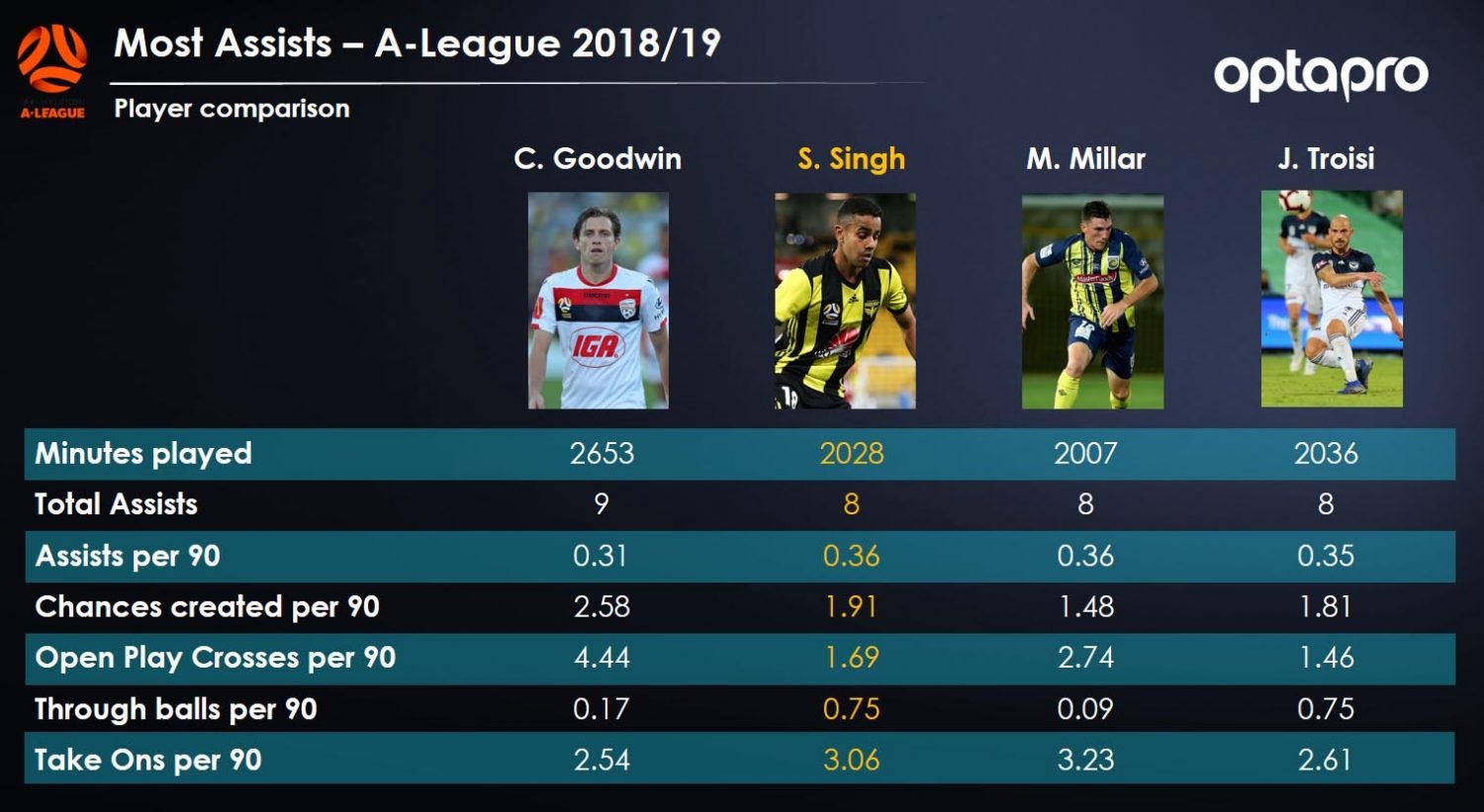 Singh also led Wellington in chances created per 90 (1.7) and through balls (0.75), where he frequently looked to play Roy Krishna in behind the opposition back line. Rather than staying central, he would often drift into areas on the right and left to receive the ball into feet from other midfielders and as shown by the heat map below, would often look to play the ball into the opposition box.

New Zealand have already reached the knockout stages of the tournament, following victories over Honduras and Haland’s Norway. During those matches Singh created the most chances (5) and saw more of the ball than any other player, averaging 78.5 touches per 90. He will be a key player for the All Whites as they look to progress deep into the competition.

Prior to getting injured last month, Paxton Pomykal was proving to be a key player in FC Dallas’ strong start to the 2019 MLS season.

Operating as a number 10 and in a slightly deeper role, the 19-year-old contributed two goals and one assist in his side’s opening eight games, helping them to five wins.

Pomykal is Dallas’ leading chance creator this season, recording 2.1 per 90. His passing accuracy in the opposition half, 87%, is 10 percentage points higher than the league average.

He is also a mobile player, who covers a lot ground, as shown by the location of where he receives the ball. Given his high chance creation output, it is worth noting that he receives the majority of passes in his own half, highlighting how he often looks to drop deep to get involved.

The USA secured qualification to the World Cup by winning the CONCACAF U20 tournament last November, where Pomykal featured in every game, predominantly in a wide left position. As well as scoring three goals, he also provided both assists in his side’s 2-0 victory over Mexico in the final.

Now fully fit, Pomykal’s recent absence has coincided with a drop in form by Dallas. Their loss is the national team’s gain – in their two matches so far he has played more centrally and as with Singh for New Zealand, he has been his side’s leading chance creator so far with four.

After three cameo appearances for Internazionale in two seasons, Pinamonti got his first taste of regular top-flight football in 2018/19 on a season-long loan with Frosinone.

Playing in a newly promoted side who ranked 17th in the competition for shots per 90 (11.9), the 20-year-old forward averaged 0.28 goals and 0.17 assists per 90, placing him second in both criteria within their squad.

Pinamonti also led his club in xG output (0.36 per 90), which is very promising as it highlights that he was able to get himself into high probability goalscoring positions regularly. Although his season shot map below indicates he was unable to convert some of his higher probability chances, if he can continue to get into good positions then there is every chance he will increase his goalscoring output in future campaigns.

With regards to his all-round game, in a direct side with a low average possession share (40.7%), he looked to provide an offensive outlet as one of two strikers, often drifting deep and into wide areas on both flanks to receive the ball. He was also frequently the target of aerial balls, challenging for 8.8 per 90, but with a success rate of 38%.

In addition to his Serie A appearances, Pinamonti played five times for Italy’s U20 side in the Elite League prior to the World Cup, scoring once. He also got on the scoresheet in Italy’s 1-0 victory over Ecuador on Sunday, securing the Azzurri’s place in the knockout stages.

His ability to find good goalscoring positions has continued into the competition too – his xG output (0.44 per 90) is twice that of his strike partner, Gianluca Scamacca (0.17).

Portugal are another European nation who have sent a squad possessing plenty of first-team experience, including Premier League defenders Diogo Dalot and Ruben Vinagre, as well as Benfica midfielder Gedson Fernandes, who has been capped at senior level this season.

Another of their players to have enjoyed a breakthrough campaign is Rafael Leão, who left Sporting CP last summer after featuring in three first-team matches to sign for Ligue 1 side Lille on a free transfer.

After scoring on his full debut in October, the centre forward bagged another seven goals to help his club secure the runners-up spot in Ligue 1.

The majority of Lille’s goals have come from wide positions courtesy of Nicolas Pépé and Jonathan Bamba, but Leão has possessed a better shooting accuracy than both of them. His on-target percentage of 57% ranks him second to Kylian Mbappe in Ligue 1 and his Shooting Goals Added (xGOT) output for the season demonstrates the quality of his finishing.

Unlike Pinamonti, who played as one of two strikers and would often drop into wide areas to get on the ball, Leão provided more of a central outlet as a lone forward, in both the attacking and middle thirds, linking up with the attacking midfielders and Thiago Mendes from deeper areas. Only 18% of his passes went forward, emphasising how he looked to bring others into play as opposed to looking to pick out runners in behind.

At international level Leão has been capped at five different age levels for Portugal, used both centrally and as a winger, but most of his appearances have come as a substitute – which has impacted on his goalscoring record. Before the World Cup he had yet to record a goal at U20 or U21 level.

His goal drought has continued during the competition so far, however his ability to get shots away on-target has continued – his xGOT of 0.51 per 90 is nearly double his xG, so he should be confident of breaking his duck against South Africa later this week.