– At Atlético, Trippier is involved in 25% fewer sequences compared to this final season at Tottenham. He is also delivering fewer crosses and playing fewer passes into the attacking third.

– However he continues to offer an attacking threat. His xA output per 90, 0.33, is the fourth highest of all La Liga players.

– His tackles and duels per 90 minutes have increased, with a higher success % compared to his final season in the Premier League.

His move to La Liga may have come as a surprise to some, but Kieran Trippier’s performances for Atlético Madrid so far this season have demonstrated why the Englishman was identified as being an attractive acquisition for Diego Simeone’s side this summer.

During the opening months of 2019/20 he has been Simeone’s preferred choice at right back in a 4-4-2 formation, ahead of Santiago Arias, starting all but two of Atlético’s La Liga and Champions League matches.

Atlético are a well drilled team, where each player has to know their role and responsibilities. They play with two number 8’s – box-to-box midfielders who can also rotate to hold the central midfield areas individually or as a pair, which allows the full backs to get higher up the pitch.

The wide players in midfield also combine with their central counterparts, knowing when to use the space inside the pitch to allow the full backs to push forward into the opposition half and the final third, with and without the ball.

At Tottenham last season the playing formation varied, with Trippier playing mostly in a back four but occasionally as a right wing back. In a back four he had more defensive responsibility, however he had the length of the right channel to play in when in possession. This allowed him to get forward and participate more getting on the ball.

So far this season Tripper is receiving fewer passes per 90 minutes (36) compared to an average of 48.8 during his last three campaigns at Tottenham, which has meant he has had to adapt his playing style slightly.

In his first six La Liga games, he has played fewer passes into the attacking third per 90 (4.5) compared to his first six games in the Premier League last season (7.2) and he is delivering 50% fewer crosses from open play, averaging just 2.3 per 90.

The change in playing style is also reflected by the Opta sequence framework, with Tripper involved in 25% fewer sequences compared to last season.  Perhaps more significantly there is a noticeable drop in his sequence involvement for sequences comprising at least three passes, in addition to the number which start in the middle third of the pitch. 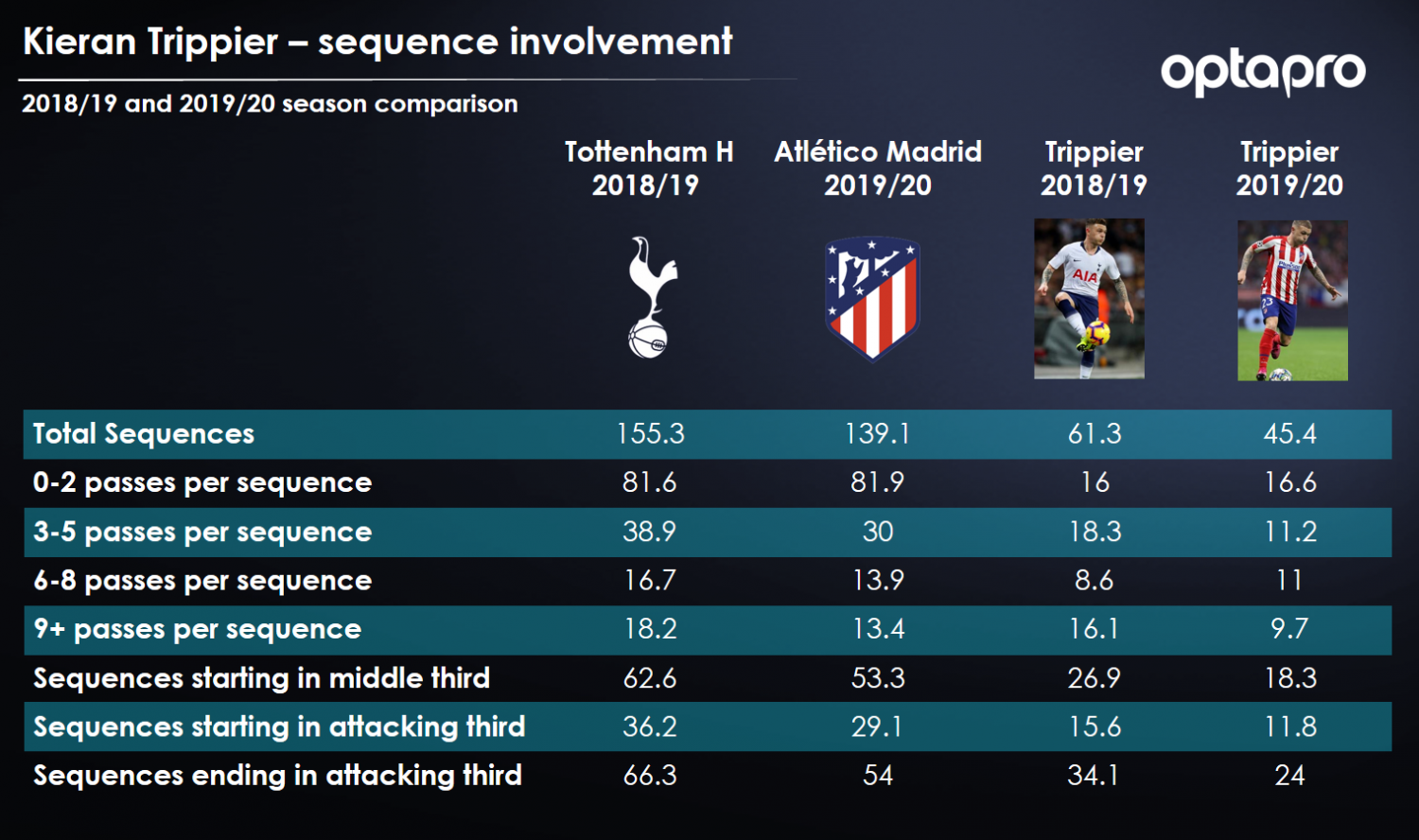 The framework also highlights how he is giving possession away less this season. He averages 12.5 sequences per 90 in La Liga where he is the final player, compared to 19.8 in the last three Premier League seasons. Part of this will be as a result of the lower volume of sequences he is involved in, however his passing accuracy in the attacking third, 86.2%, is 4% higher compared to his time at Spurs.

The graphic below compares his pass completion percentage from his first six league matches last season with the opening matches of 2019/20 and whilst it is a relatively small sample, it is clear that Trippier’s pass success into wide areas down the right is higher this season.

The reduction in Tripper’s sequence involvement in the middle third indicates he is less involved in build-up play compared to his time at Spurs, however in the attacking third he is having a real impact for Atlético.

His attacking threat is highlighted by the number of chances he is creating (0.6 per 90), which is nearly double his output from last season. The quality of his passes played into dangerous areas is also reflected in his xA, 0.33 per 90, which is the fourth highest output of all players to have appeared in at least 300 minutes in La Liga this season. For context he was ranked the second highest right back in the Premier League for xA last season, behind Trent Alexander-Arnold, with 0.24.

The scatter chart below highlights Trippier’s attacking efficiency in comparison with other right backs in La Liga and the Premier League so far in 2019/20. Overall he ranks second for xA per 90, despite receiving substantially fewer passes than Dani Carvajal at Real Madrid.

An increase in defensive responsibility

Out of possession, Tripper ranked second and third amongst Premier League right backs last season for possession won in the attacking and middle thirds respectively, however during the early stages of his La Liga career he is now winning the ball back less across the pitch.

Despite the drop in recoveries, defensively Tripper is making a larger number of defensive contributions this season compared to his final season in the Premier League. As highlighted by the chart below, he has also seen a noticeable increase in the number of successful tackles and duels under Simeone this season.

Some players find it easier than others to transition to a new league, but things are looking promising so far for Trippier.

Despite being involved in fewer sequences, his attacking outputs are actually higher compared to his recent Premier League campaigns. At the same time, he is also displaying improvements in his defensive outputs – settling in well into a new back line.

Tripper’s ability to hit the ground running demonstrates that recruitment works well when players possess the attributes required to acclimatise to a new league, something which is a key consideration for clubs in the recruitment process.