– In each of his career Ashes hundreds, the vast majority of Steve Smith’s shots have had a control percentage of at least 90%.

– During his second innings century at Edgbaston, nearly a third of all his false shots against seamers occurred during his first eleven balls.

After being close to irremovable during the opening Ashes Test, Steve Smith’s match-winning performance has left England with more questions than answers when it comes to bowling at the former Australia skipper.

If we take a look at each of Smith’s 10 Ashes hundreds, one of the more remarkable aspects of each innings is his shot control rate, where the vast majority of his shots have been high controlled (defined as having a control percentage of 90% or higher), highlighted in blue below. In fact he has only conceded one chance from dropped catches or missed stumpings across all these centuries.

Across these hundreds there have only been two instances where Smith has demonstrated a low shot control rate during the early stages, highlighted above in orange. One of these innings was his second hundred at Edgbaston.

Taking a closer look at that innings, we can see that nearly a third of his false shots against seamers occurred during his first eleven balls (four out of a total of 13), with all four deliveries pitching on a length outside off stump. Indeed, he didn’t play a single false shot to seam deliveries pitching on the stumps or outside leg during the innings. 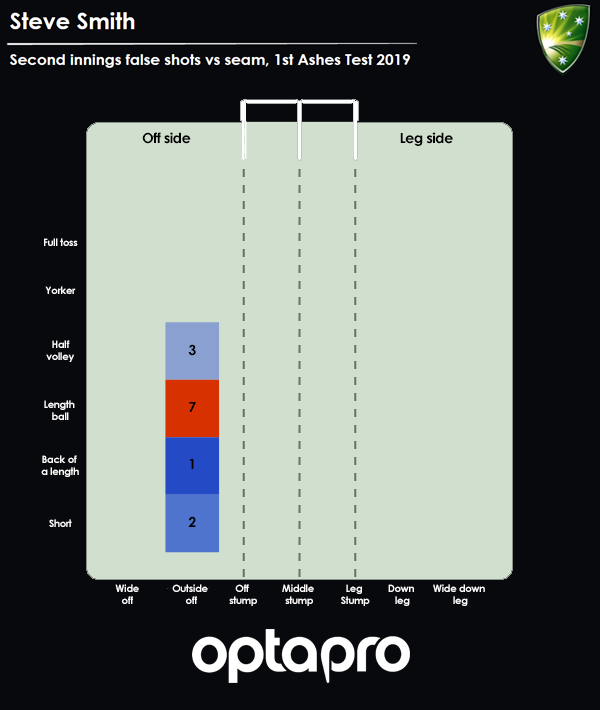 So could this be an area England can exploit?

It is worth noting that two of Smith’s false shots early on occurred in the same over, bowled by Chris Woakes, with one ball seaming in and another seaming out. Therefore if England’s seamers can consistently land the ball in the same spot next week when Smith first arrives at the crease, and get the ball to seam both ways, there is potential to bring both the inside edge and outside edge into play.

However, whilst Smith has been caught behind off the outside edge to seamers 10 times in Tests since the first Ashes match in 2015, based on how England bowled in Birmingham it would indicate this was already one of their key tactics.

91% of all the deliveries sent down to Smith during the match by seamers were directed outside off stump and when they hit their length, he still managed to score 56 runs at a strike rate of 44.8. More ominously, when they missed their length the rate increased to over 65.

Whilst the playing conditions are likely to be different next week, England will hope that their seamers can force Smith into more false shots early on in the hope of dismissing him cheaply, otherwise based on his historical shot control they could be faced with the prospect of him contributing further match-defining contributions at the Home of Cricket.

Could Leach expose a possible weakness?

Another key talking point following the Test has been the possible inclusion of a left-arm spinner at Lord’s to target a potential weakness in Smith’s armoury. In the 37 Tests he has played since the start of the 2015 Ashes, he has been dismissed to left-arm spin 17 times. 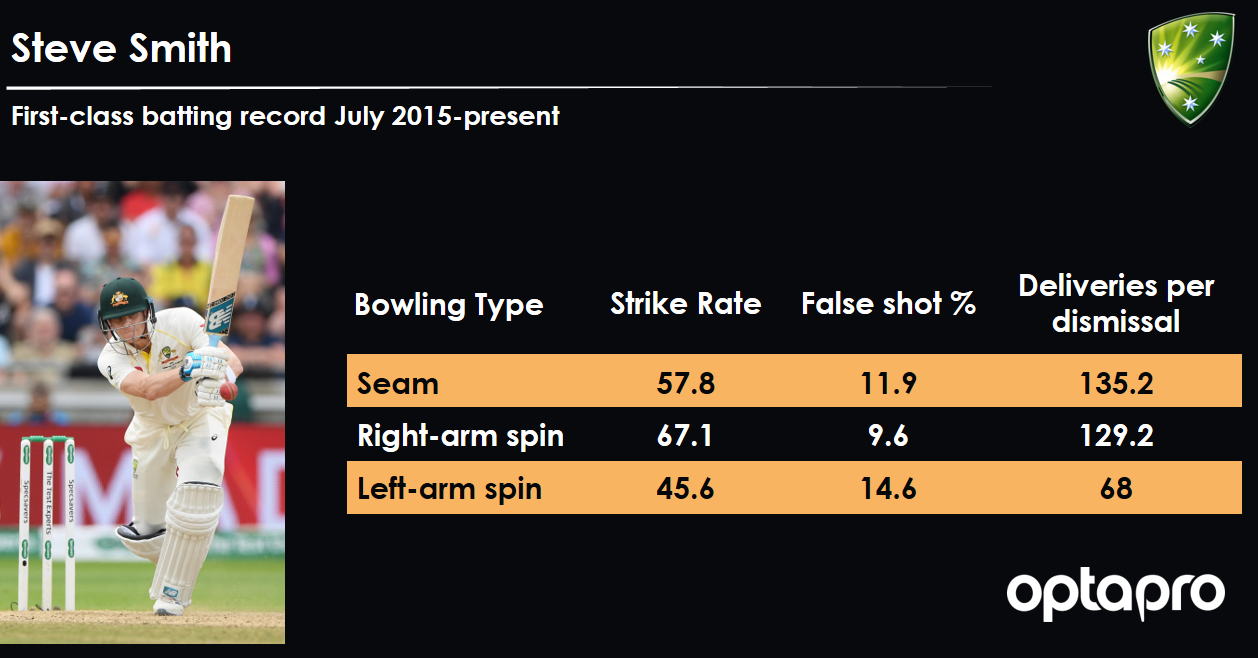 These figures would indicate that Jack Leach warrants selection, however there is a caveat to these numbers. Of Smith’s 17 dismissals, nearly two-thirds have occurred on the sub-continent. Away from sub-continent conditions, his strike-rate (55.2) and false shot (11.7%) numbers are higher, however his average balls per dismissal remains in the mid 60’s.

Given his current form, it would be naïve to suggest that the inclusion of a left-arm spinner will phase him, however it would offer a new dimension to an England attack which with the exception of a brief passage during the final session of day three, struggled to find a way to unsettle him over a prolonged period of 71 overs across both innings.