– Focusing on wide attacking midfielders based in Scandinavia and Austria, Jonathan Amon recorded the highest output of any player aged under 27.

– Amon generated most of his progressive PV+ contributions from progressive carries, cutting inside from wide areas, highlighting his productivity as an inverted winger.

Imagine this scenario: A recruitment analyst working for a Belgian or Dutch club, who is responsible for monitoring the Scandinavian and Central European markets, is tasked with identifying a player who can improve the first team’s attacking output in wide areas down the left.

As part of the club’s recruitment profile, any prospective player must possess the following key offensive attributes:

Once upon a time these attributes would have been quantified solely by the naked eye of a scout assessing a player live, backed up by traditional stats. However, thanks to the introduction of various advanced player assessment metrics, we can now look beyond traditional numbers to objectively quantify the effectiveness of players against these types of criteria.

Last month OptaPro introduced a Possession Value framework, which attributes credit to individual players based on their positive and negative contributions in relation to increasing the probability of their team scoring from an individual possession.

More details on the framework, which can be broken down into various different player attributes, can be found here.

In this blog we apply Possession Value to the requirements set in this hypothetical scenario to demonstrate how it can help identify players who not only meet these criteria, but also contribute substantially more positive than negative actions over the course of a season.

For this analysis, we have focused on players playing in the Scandinavian and Austrian top-flight leagues. Naturally it is quite difficult to compare players across competitions of different quality, however, what we may find in these leagues are players commanding a vastly lower price tag.

As we are in the early weeks of the season for Denmark and Austria, we have focused on player performances in these countries during 2018/19, whilst for the Eliteserien and Allsvenskan we focus on the recently concluded 2019 campaign.

By focusing on 2018/19, our results have returned some players who moved clubs during the summer. Therefore it is important to state that the purpose of this blog is to provide an example of a process where Possession Value could be applied within Talent ID, as opposed to actually flagging players who could potentially be available in the next window.

By identifying the players aged under 27 who featured in at least 1000 on-field minutes during the seasons analysed, with at least 40% of those appearances coming as a winger or wide midfielder, we have established a long-list of 121 recruitment candidates. 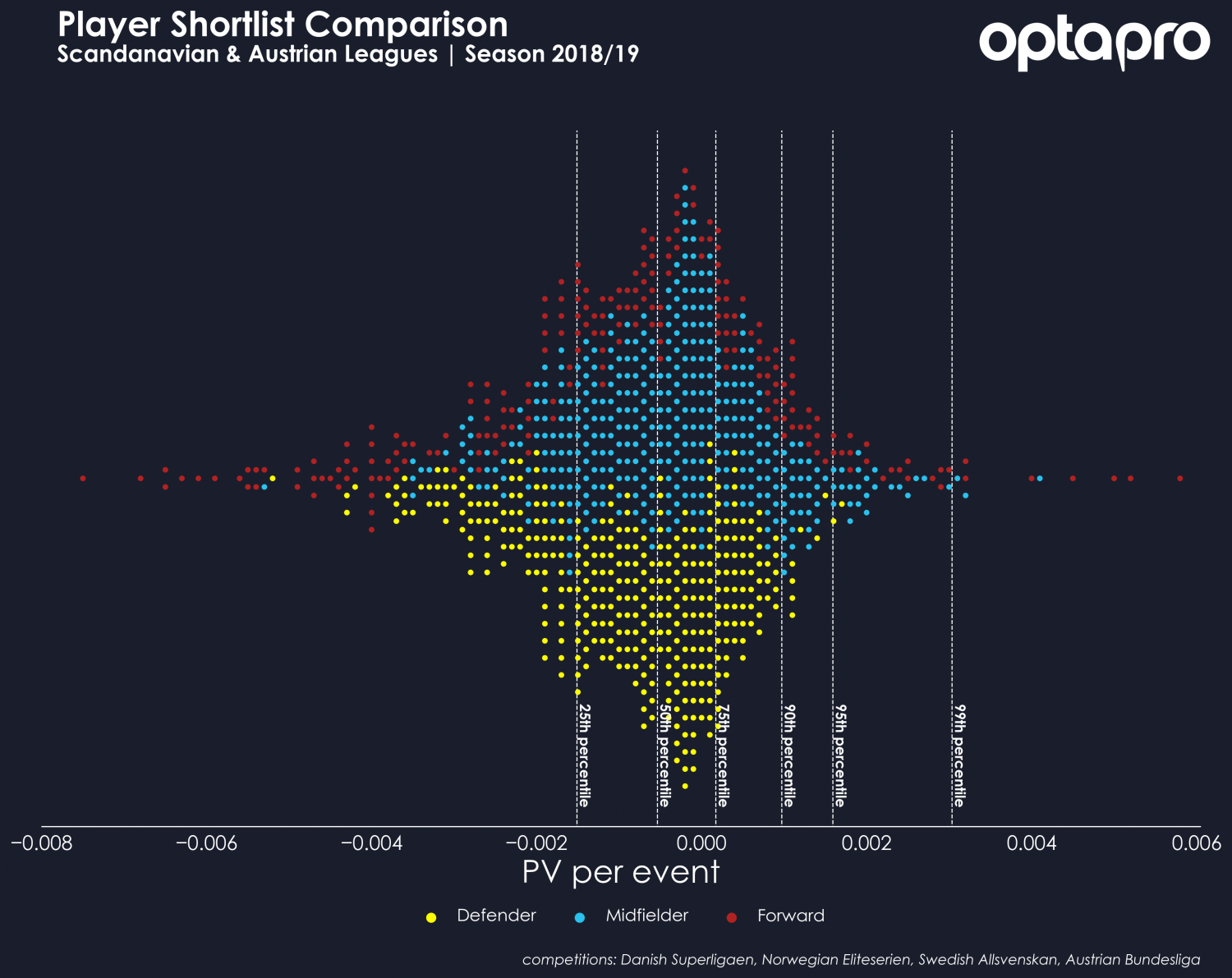 When we compare players based on per 90 metrics we are essentially counting, however by applying PV we can add an extra layer of value to help understand what impact they are having. The coloured points in the graphic above represents each player’s PV per event and where they sit amongst our long-list of recruitment candidates.

As we are looking for chance creators, we will now focus on players who sat in or above the 75th percentile for PV per event. This leaves us with a revised shortlist of 23 players.

By normalising each players’ per 90 metrics relating to ball carrying and passing, we can use dimensionality reduction methods to create a diamond plot to profile each player’s progression style. 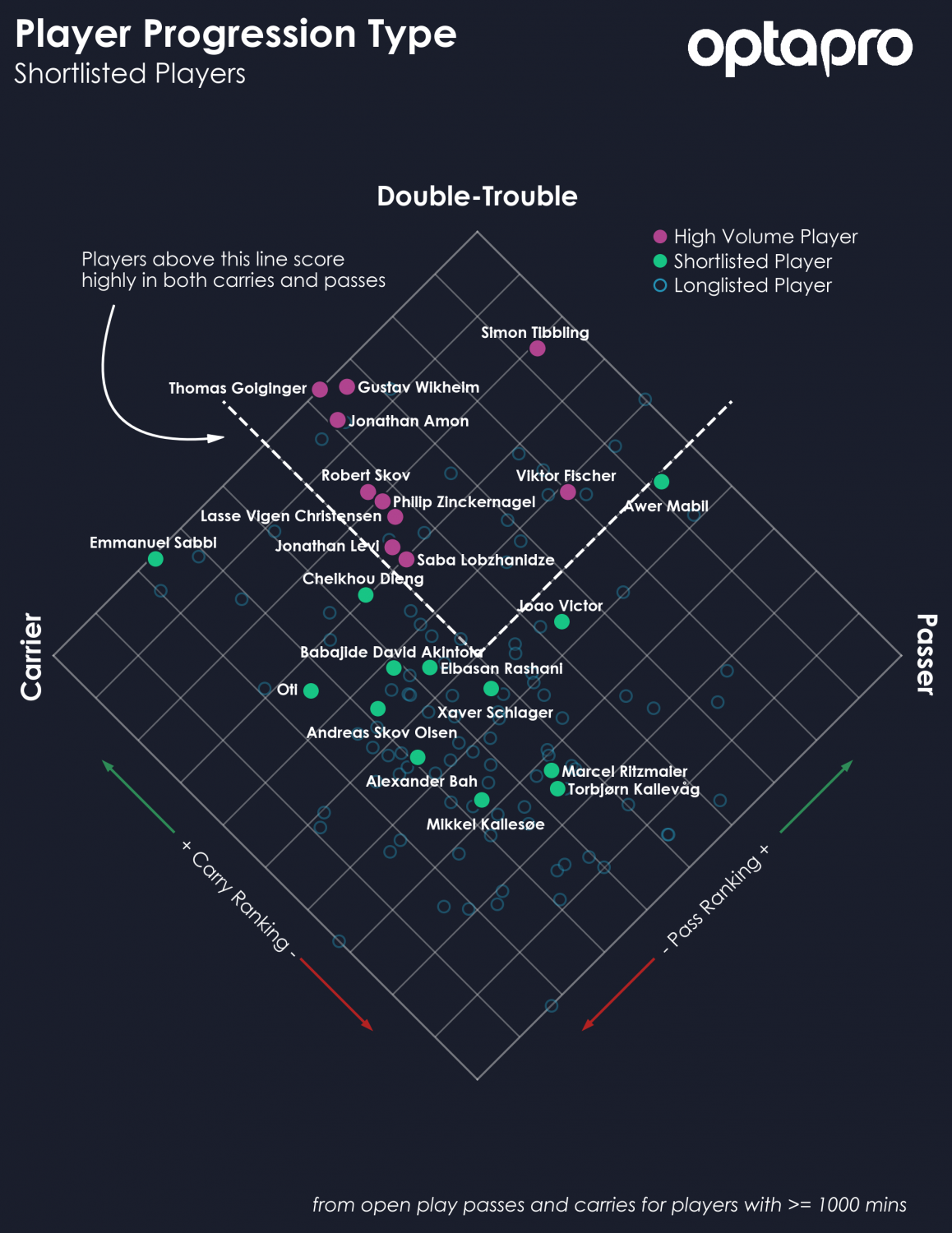 This can help recruitment departments identify players fitting a very specific profile for the type of wide player they wish to recruit, and potentially eliminate players from their shortlist for live assessment.  Although Awer Mabil falls just outside the top zone of the diamond, his passing ability is shown to be quite strong so he too could merit further analysis. 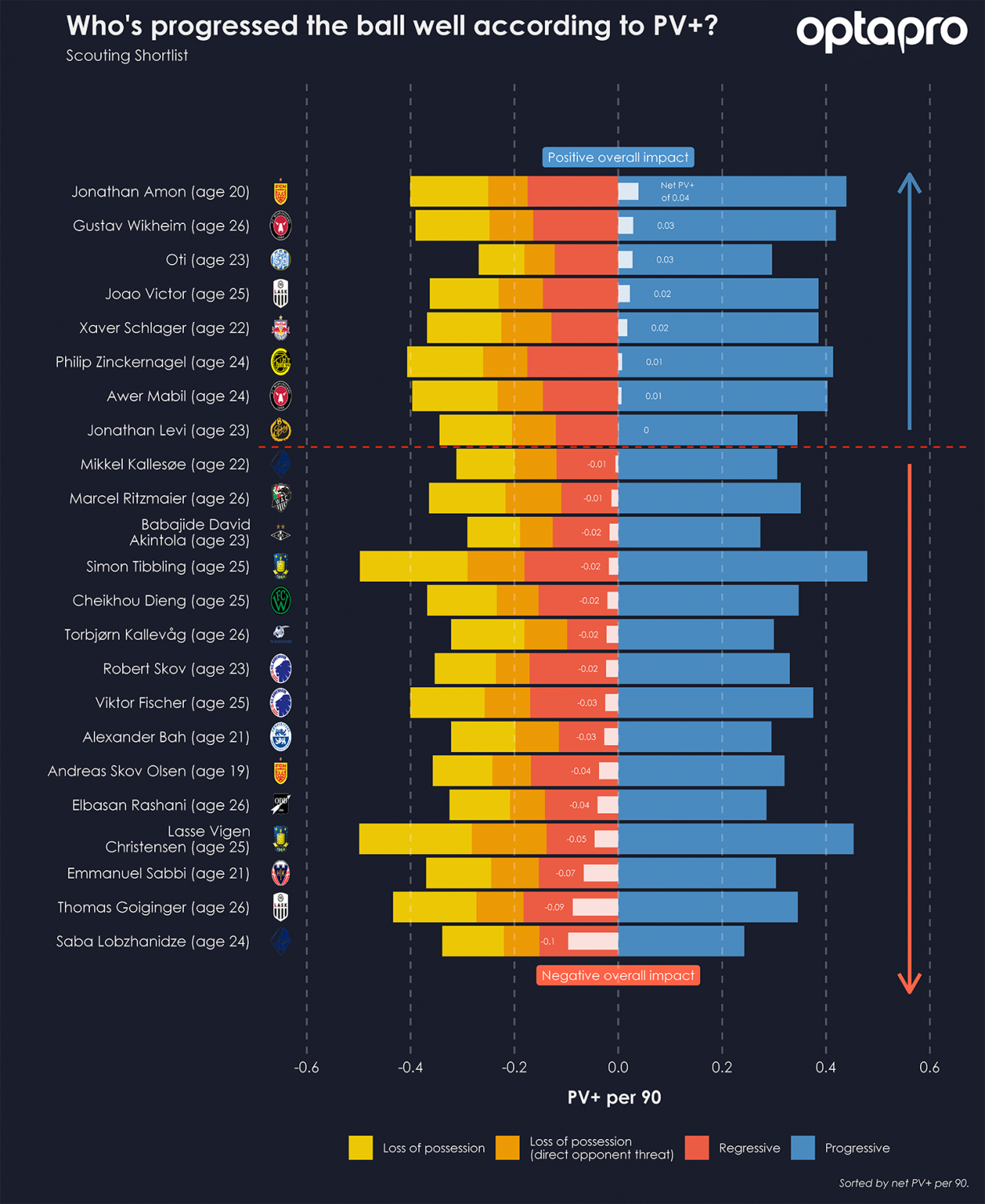 The chart above breaks down the PV+ output per 90 from each player on our shortlist. 20-year-old FC Nordsjælland winger Jonathan Amon comes out on top, with a net PV+ per 90 of 0.04.

However this figure in isolation does not tell us which attributes are contributing the most to Amon’s positive output, so let’s dig deeper using PV to scrutinise Amon’s performances.

As we can see from the pitch maps above, Amon performs very well at progressive carries. He can beat defenders and get into the box, and in-turn create chances for his team. He has a low output on crossing and scores negatively here, however given our criteria of an inverted winger this isn’t as big an issue as it could be. Given he is right-foot dominant, it makes sense that he prefers to cut inside instead of progressing further down the wing.

Looking closer at his assist and shot maps below, and taking into account his strong ability at carrying the ball, Amon profiles closer to a wide forward instead of an attacking midfielder. That being said, his xA per 90 output is in the top ten of our original long-list. 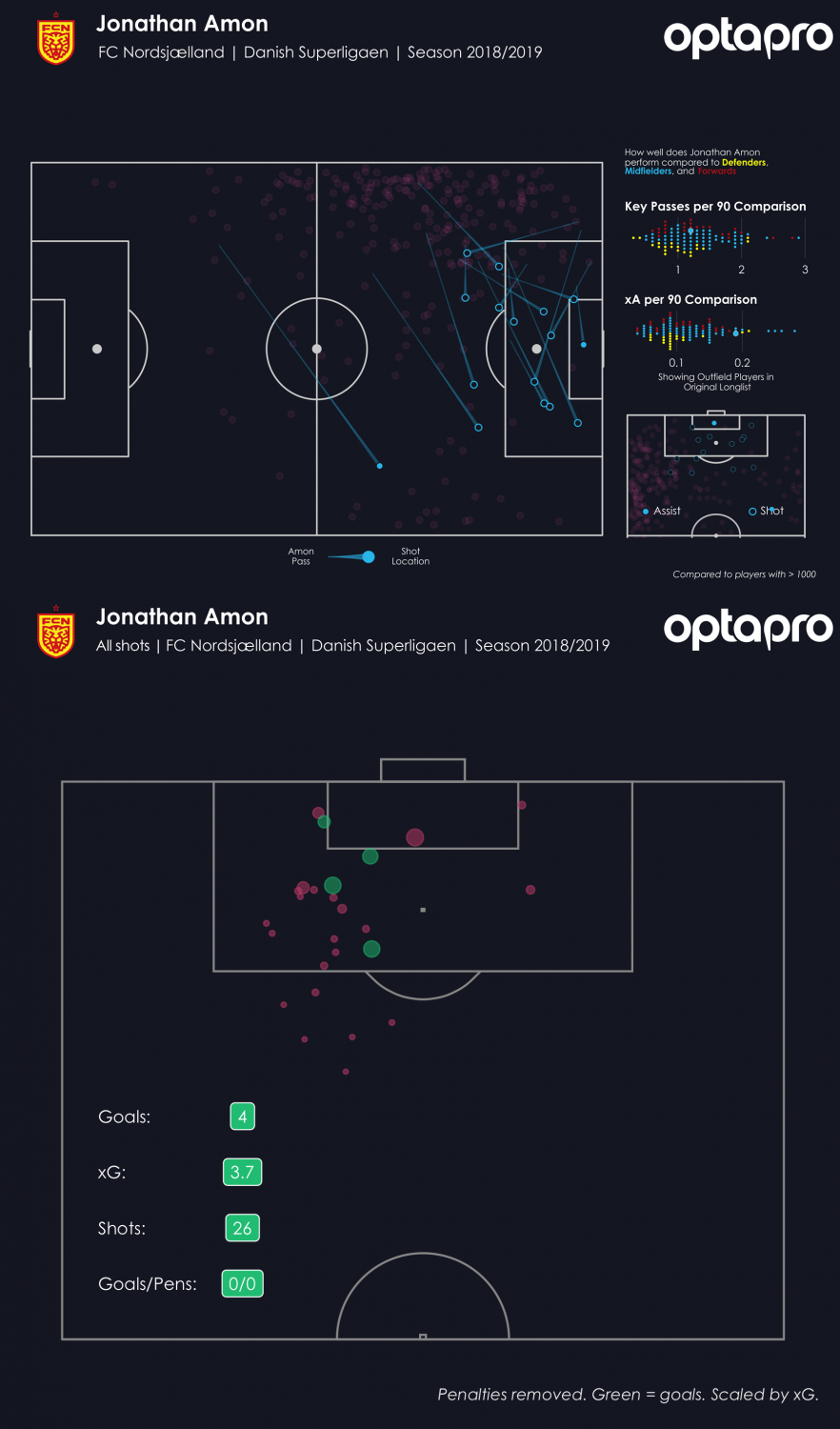 Staying in Denmark, Gustav Wikheim (26) was another player who came out near the top of our initial PV search.

Wikheim departed FC Midtjylland in the summer, signing for Al-Fateh in Saudi Arabia and like Amon, he carried the ball well and demonstrated an ability to create chances from these carries.

He also seemed less restricted to the left wing and could contribute from both central and wide areas. However unlike Amon he scored well in crossing, targeting the penalty spot for his team mates to attack the ball. 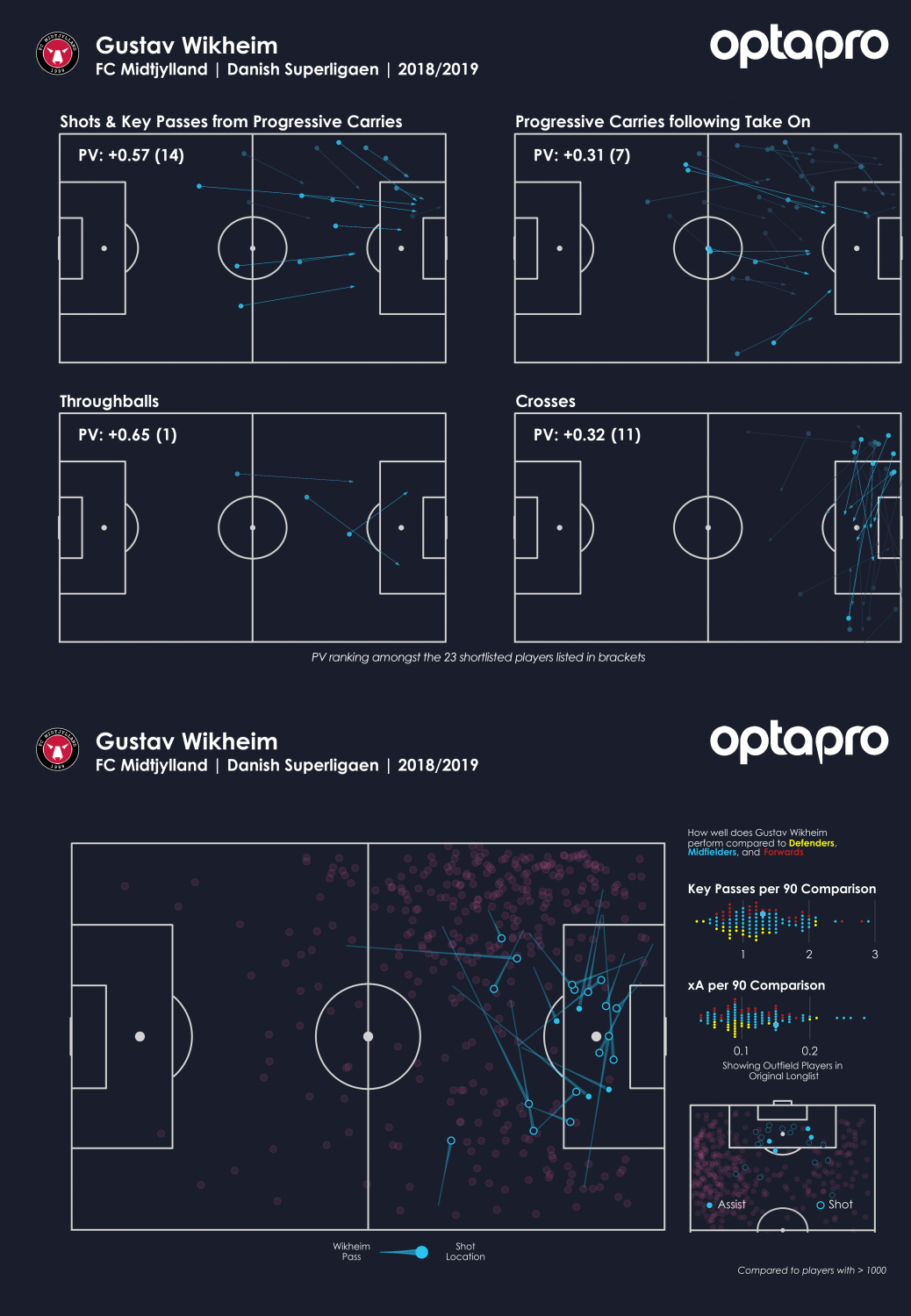 Wikheim’s teammate at Midtjylland last season, Awer Mabil, is another interesting candidate, albeit based on performances from the right wing. Whilst having a lower net PV+, the 24-year-old had good numbers for chances created from progressive carries and generated a huge volume from crosses. 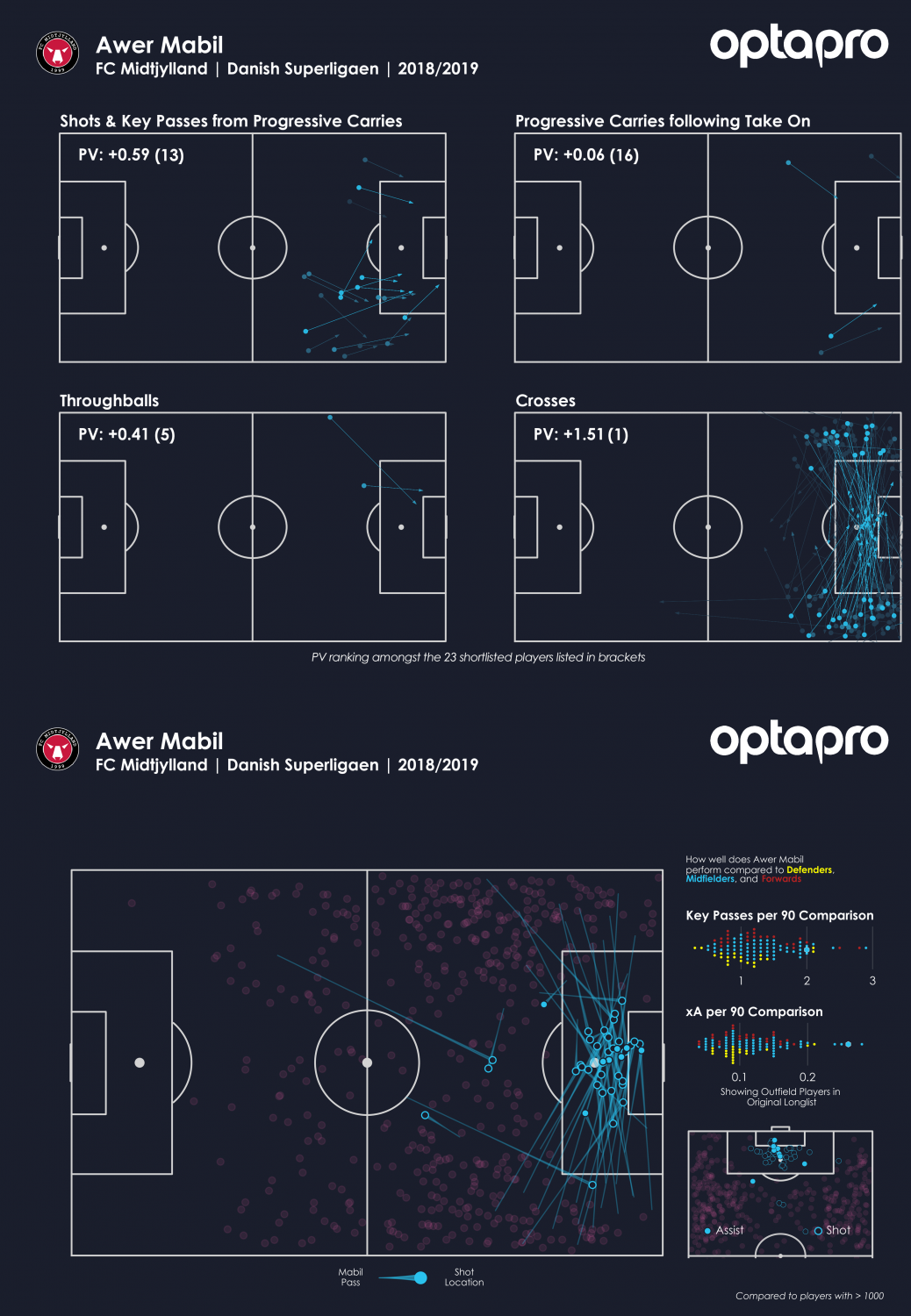 Another left winger, who featured in the Austrian top-flight last season but is now plying his trade in the German Bundesliga, also profiles similarly to Amon. As highlighted below, João Victor (25) demonstrated an ability to carry the ball and get shots or key passes away, resulting in a high PV output, however his overall crossing output was much lower compared to Mabil. 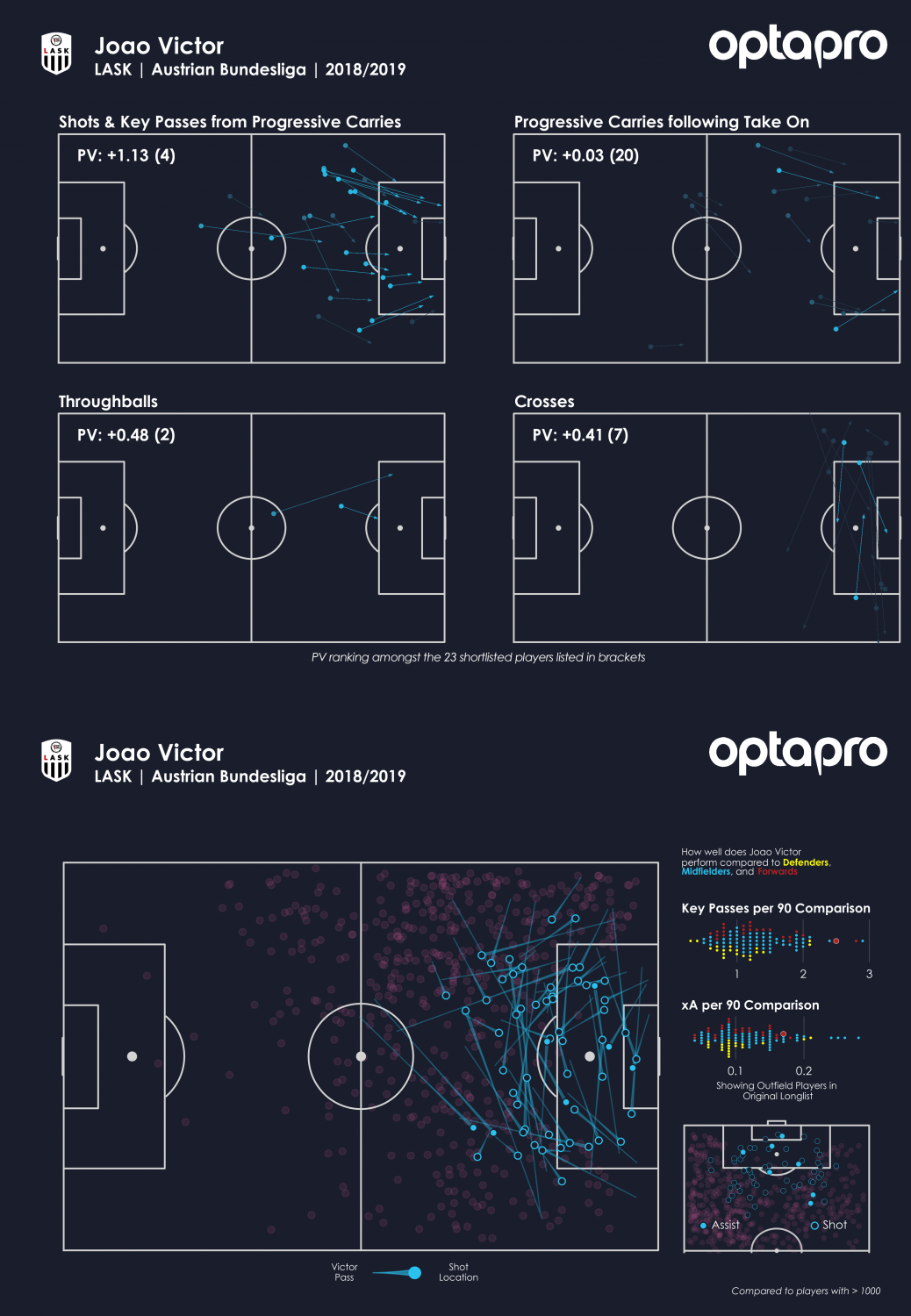 Having moved to Wolfsburg in the summer, it is unlikely the Brazilian would now be a viable target for a Dutch or Belgian club, however the fact he moved to one of Europe’s big-5 leagues should highlight the value of this concept to support player identification.

By applying granular-based metrics such as PV, we can look beyond raw counts and per 90 statistics to garner deeper insights to inform a player profile. This can be a useful filtering tool ahead of the live scouting of recruitment targets.

PV can also be applied to establish the underlying performance of each player in a club’s own first-team squad, to identify areas where a player can look to improve their own performance or to inform the recruitment strategy to strengthen key positions on the field.

By following a relatively straightforward process of elimination, we can quickly identify emerging players involved in competitions outside of the big-5 leagues who possess key attributes relevant to a positional profile – and who may potentially be available at a fraction of the cost of more established performers.