– Eintracht are the second most direct team in the German top-flight.

– Crosses play a big part in their attacking approach in the final third.

– As a team collectively, their xG/shot output of 0.14 is the best in Bundesliga, indicating their attacking players are adept at knowing when to shoot and when to pass.

After securing their first major silverware in 30 years by winning the 2018 DFB-Pokal, Eintracht Frankfurt have continued their upward trajectory into 2018/19 despite being forced to change their coach last summer.

Following Niko Kovac’s departure to Bayern Munich, Adi Hütter has overseen a campaign which sees them sitting in the final Bundesliga Champions League place with three games to play. They have also knocked Internazionale and Benfica out on route to the semi-finals of the Europa League, which after last night’s first leg with Chelsea remains finely poised at 1-1.

The club have come a long way in a relatively short period of time – as recently as 2016 they narrowly avoided relegation to the second tier – and in addition to building on Kovac’s foundations, Hütter has overseen a noticeable change in the club’s playing style, with impressive results. This season are completing fewer passes overall, with a noticeable drop within their own half, but more importantly recording more passes in the attacking third of the field.

Eintracht possess a small but very settled squad with 16 players featuring in at least 10 league matches so far this season. 11 of those have played in 25 games, with Filip Kostic and Danny da Costa starting every league fixture.

In this blog, I take a closer look at Eintracht’s approach in possession and how this is reaping rewards.

Eintracht Frankfurt tend to set up in a 3-4-1-2 formation. They started the season operating with a back four and a lone forward up front, however after three defeats in their opening five matches they switched to a back three. Since making that tactical switch they have only lost four matches in Bundesliga.

This season they rank in the Bundesliga bottom four for completed passes and pass completion %, whilst their average share of possession is below the league average. 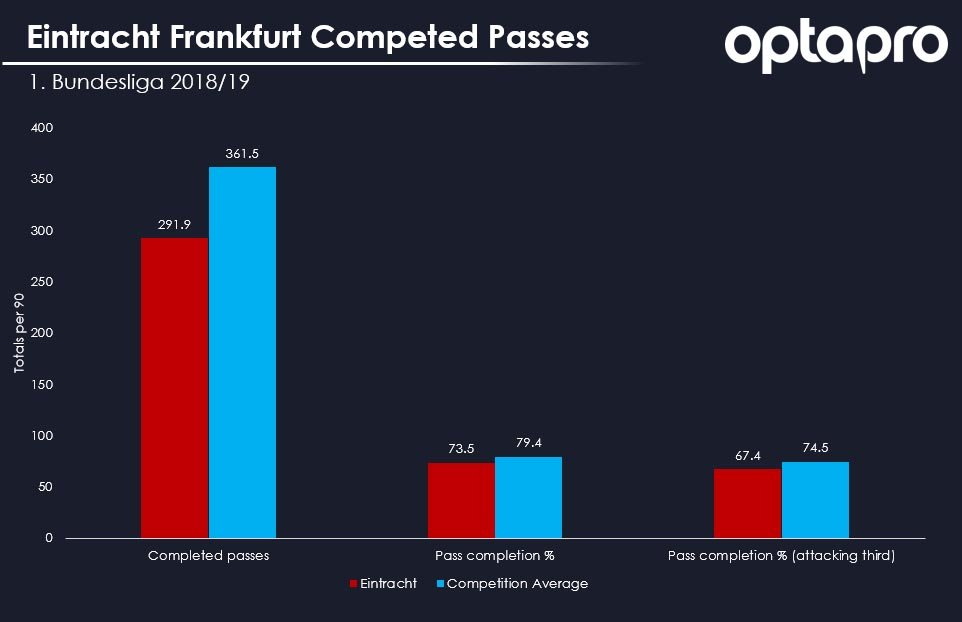 When watching them live they tend to move the ball forward quickly into the centre forwards from the midfield and defensive lines with the first pass, or the second pass if the receiver is better positioned to find a better passing line into Luca Jovic or Sébastien Haller.

Numbers from the sequence framework back this up. Per sequence, they average 2.02 metres gained per second (behind only RB Leipzig) and lead Bundesliga in sequences comprising a maximum of 2 passes, which indicates that they don’t move up the pitch with possession of the ball. 41.6% of their total passes are forward and they attempt 38.6 long passes per 90 from the defensive third, with 28.7 of them ending in the opposition half.

Using Kostic as an attacking outlet

From looking at the end location of passes played from inside their own half, we can see that the majority are played into areas down the left. This is backed up by the sequence framework – the average starting point of all Eintracht’s sequences is the second closest to the left-hand touchline in the league (after Hoffenheim).

Filip Kostic, operating on the left of Eintracht’s midfield, is the player who looks to get on the ball, both from his starting position on the left and coming inside to receive. He has 10 assists this season, with an xA of 7.59, and looks to be progressive with his passing. This means he is often the final player at the end of a sequence – he ends 24.3 per 90, more than any other Eintracht player – but this would suggest he is trying to create opportunities in advanced areas, something which is backed up by the frequency of his crosses, which total 7.2 per 90.

Out of possession the Serb displays very few defensive qualities, which is compensated by Gelson Fernandes and Sebastian Rode being disciplined and not often running beyond the ball in central midfield. As displayed below, Gelson plays very few passes into the final third, making a large volume between both penalty areas.

With Gelson and Rode holding, it’s usually Jonathan de Guzmán or Jetro Willems (when playing in the centre of midfield) that look to play forward in midfield.

Eintracht in the attacking third

In wide areas they tend to launch crosses into dangerous areas quickly, instead of picking out players.

They rank fourth in Bundesliga for crosses in the attacking third (19.8 per 90), but only 22.3% are successful, ranking them 17th. As mentioned previously, Kostic delivers more crosses than any other player, however de Guzmán and Willems also record more than six.

Set pieces are also a strength, with 3.1 shots per 90 coming from corners and indirect free kicks. De Guzmán typically delivers corners from both sides and more than one in four corners have been taken short – no other team have had more short corners this season. These routines vary and have heralded success – they rank fourth in Bundesliga for goals resulting from corners (7), exceeding their xG (5.9).

In front of goal, Eintracht have marginally exceeded their xG (55.9) with 58 goals. All but three of their goals have come from inside the box and their xG/shot of 0.14 is the best in Bundesliga, which highlights that their attempts are frequently taken from good locations.

Luca Jovic has had an excellent season, scoring 17 times from an xG of 14.5.  A high volume shooter, he has taken 4.1 shots per 90, with 44% being on target. As shown by his shot map below, he has been prolific in the box, particularly from central areas within 12 yards of goal.

Eintracht have just taken up the Option to Buy on Jovic from Benfica. His time at Benfica was difficult, getting injured at the start of his first full season and subsequently finding it difficult to break into the first team. He moved to Eintracht on loan at the beginning of the 2017/2018 season, where he only started nine matches but still scored eight goals, helped by an additional 13 appearances from the bench.

2018/19 has been his breakthrough season, delivering on the potential that I first saw in him when he represented Serbia at U16 level. Since then he has progressed through the various international age groups and is now with the senior squad, having also been involved in their World Cup squad last summer.

Jovic’s strike partner, Sébastien Haller, has a slightly higher shots-on-target ratio (47.2%) but takes fewer shots (2.26 per 90). Looking at his shot map we can see that most of his goal attempts occur closer to goal.

The Frenchman has had an interesting career so far, breaking into second tier Auxerre’s first-team as a teenager before moving to Eredivisie side Utrecht, initially on loan before making the move permanent.

He then made the move to Frankfurt two years ago. Still only 24, he has reached double figures for goals four times in his last five seasons. 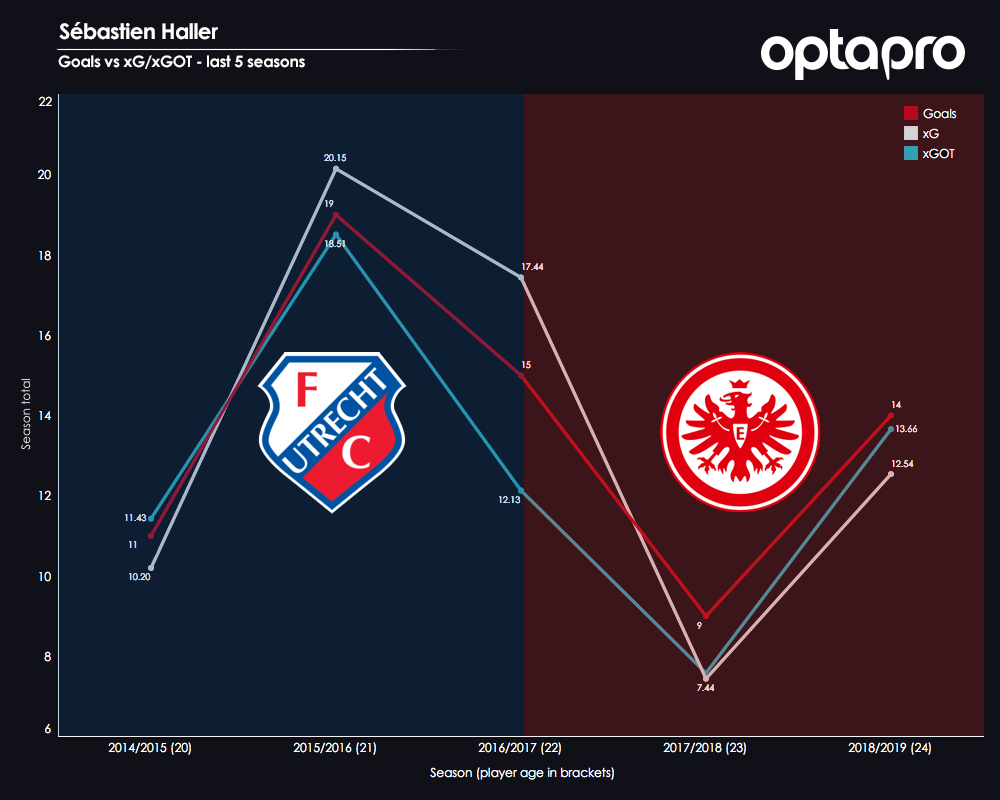 Whilst his total on-field minutes have dropped since moving to Germany, which partly accounts for the drop in his goal output, he has exceeded both his xG and xGOT projections during both of his Bundesliga campaigns, which may reflect improvements in both his finishing and decision-making in front of goal.

Being 1.90m, it is perhaps no surprise that nearly 36% of all Haller’s goal attempts have come from headers but in terms of Eintracht’s overall style of play, Haller also plays an important role in being an outlet for direct passes. He is involved in 14.1 aerial duels per 90 and by applying OptaPro’s new phases of play model, we can see that he is the most frequent outlet for direct long balls in the Bundesliga. 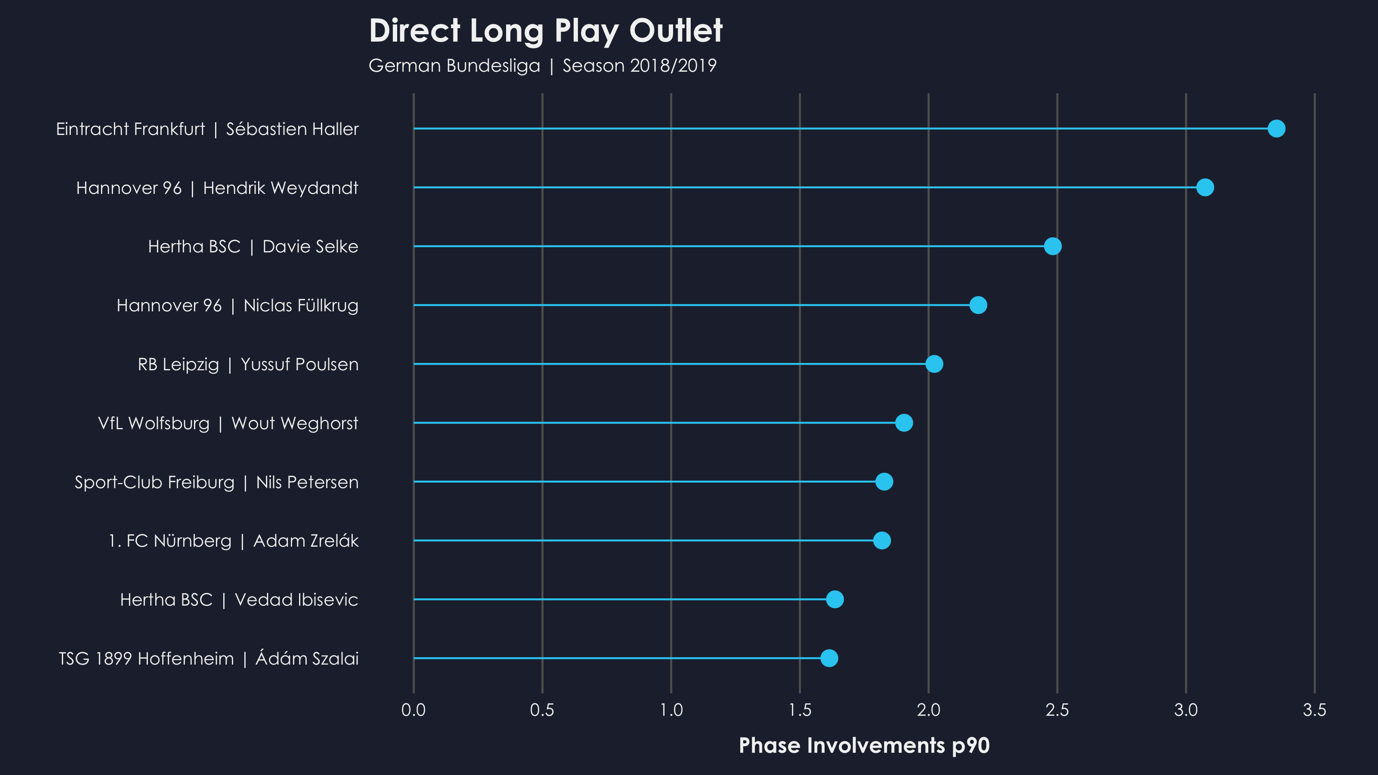 Becoming more direct – and being successful

In recent seasons, the likes of RB Leipzig and Leverkusen have demonstrated that it has been possible to be successful in Bundesliga by taking a more direct approach. However this season has been the first time since 2010/11 that two teams in the league’s top four have progressed the ball upfield at more than two metres per second.

Adi Hütter has managed to successfully implement a style, based on getting the ball forward quickly from the back and creating opportunities in the attacking third, through crosses from wide areas and looking for quick through balls played in-behind the opposition back line.

The club also possess a front two who display excellent decision-making when deciding when to shoot inside the attacking box. As well as scoring regularly, Jovic (0.16) and Haller (0.24) have both recorded high xG/shot ratios this season, with the latter posting the best ratio of any player with at least 50 shots.

This has all culminated in them challenging on two fronts as they enter the final weeks of the campaign – with major rewards potentially at stake both at home and abroad.