– Between 2013 and 2018, 7% of all Premier League sequences containing a progressive carry resulted in a shot.

– Eden Hazard ranked first for progressive carries per 90 in each of the last five Premier League campaigns.

Those who have an interest in football analytics will be well versed in many of our on-ball events. However, there is one aspect of the game that is often overlooked which we hope to highlight in this blog.

A by-product of the OptaPro sequence data framework, carries have an intrinsic value in a team’s attack.

A carry is defined as any movement of the ball by a player which is greater than five metres from where they received the ball. Further information can be found in this article authored by Tom Worville in 2016. 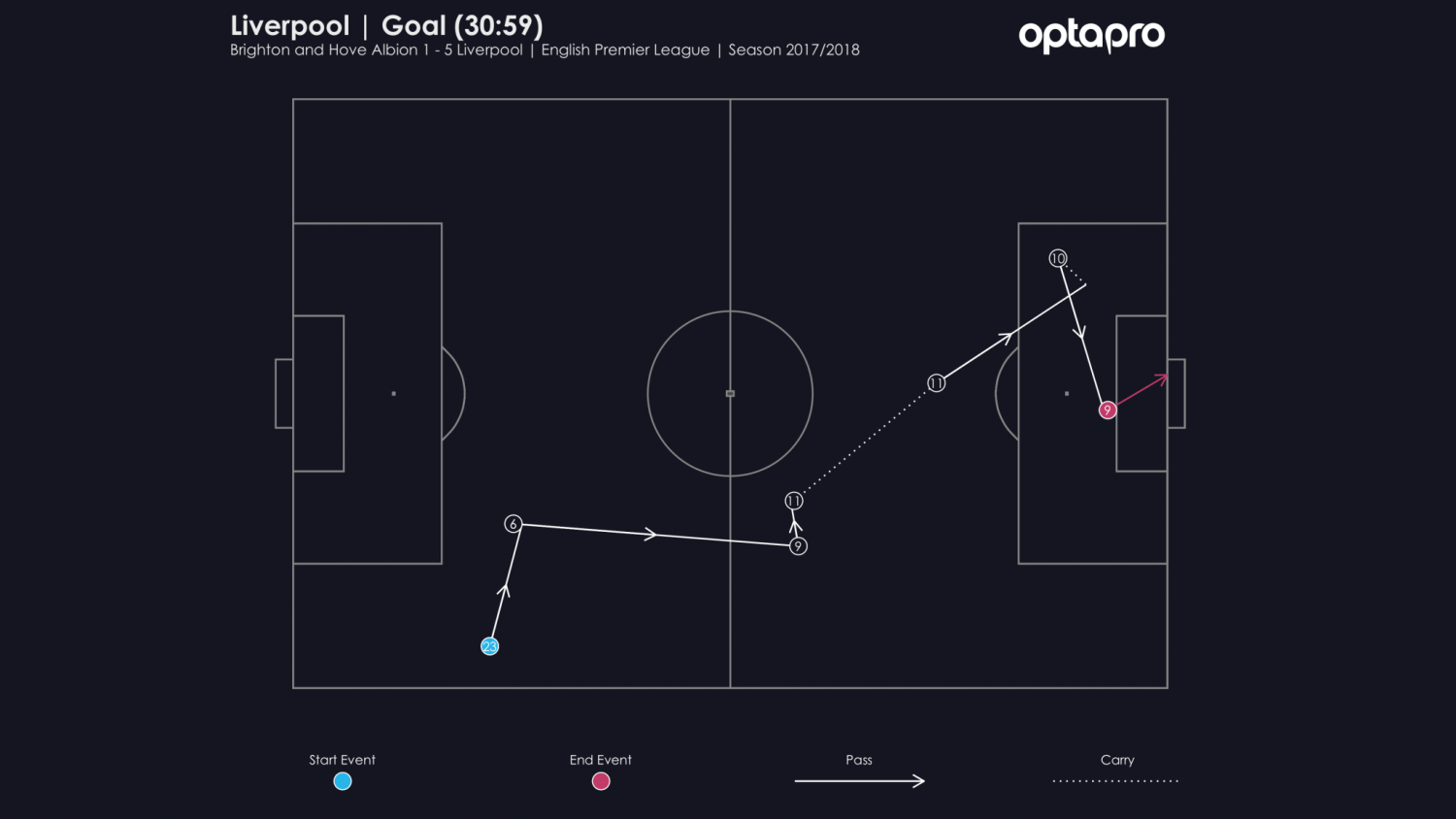 The image above displays an attacking sequence from a match between Brighton and Liverpool in December 2017, which features a progressive carry illustrated by the dotted line from near the halfway line to the outside of the opposition box. This carry, by Mo Salah, is what we will be referring to as a progressive carry in this article.

What is the value of a progressive carry?

Looking at the Premier League between 2013 and 2018, we can see that of all sequences, 7% that contained a progressive carry resulted in a shot. This is a significant rise on the 2% of sequences that did not contain such an action.

The question then is, are some players more capable of carrying the ball in the opposition half and how can we identify these carriers? Looking at where successful progressive carries occur (defined as when the player retains possession), we see that the highest density is on the wings, which is unsurprising.

As such we could assume that wingers will feature highly on any ranking – which we will come onto shortly – but first, who are the players that were most effective making progressive carries in central areas?

By using the zones outlined above, we can count how many times each player performed a progressive carry in each zone. If a player made at least 40% of their progressive carries in the central zones above, they were included in the analysis. This gives us a shortlist with Neymar and Messi on top, which is always a good eye-test indicator.

What we can glean from the above is that forwards and midfielders provide the highest amount of progressive carries. This of course can be attributed to the strict parameters we have set to classify progressive carries in this article. However, we do see a few defenders involved.

Carrying the ball from the back

Teams building from the back is an ever-increasing sight and in the scatter chart below, we look at defenders who begin a progressive carry in their own half and move the ball into the opposition half.

We see two Manchester City central defenders as the standouts, which makes sense considering their role when the Premier League champions are in possession of the ball. 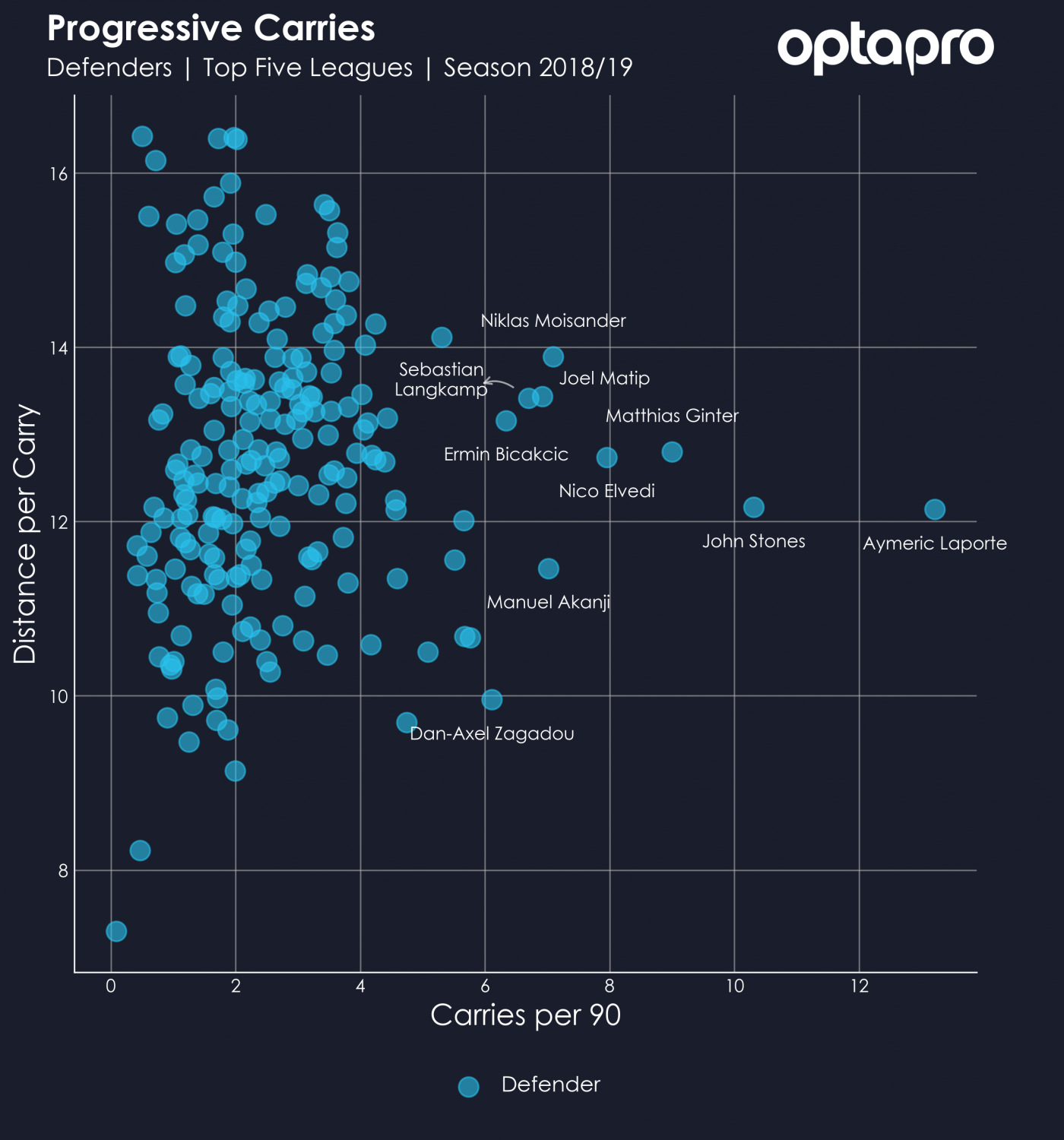 So, having looked at carries in central areas and carrying the ball out from the back, let’s explore at the overall picture. Who are the top players at progressing the ball up the pitch through carries? 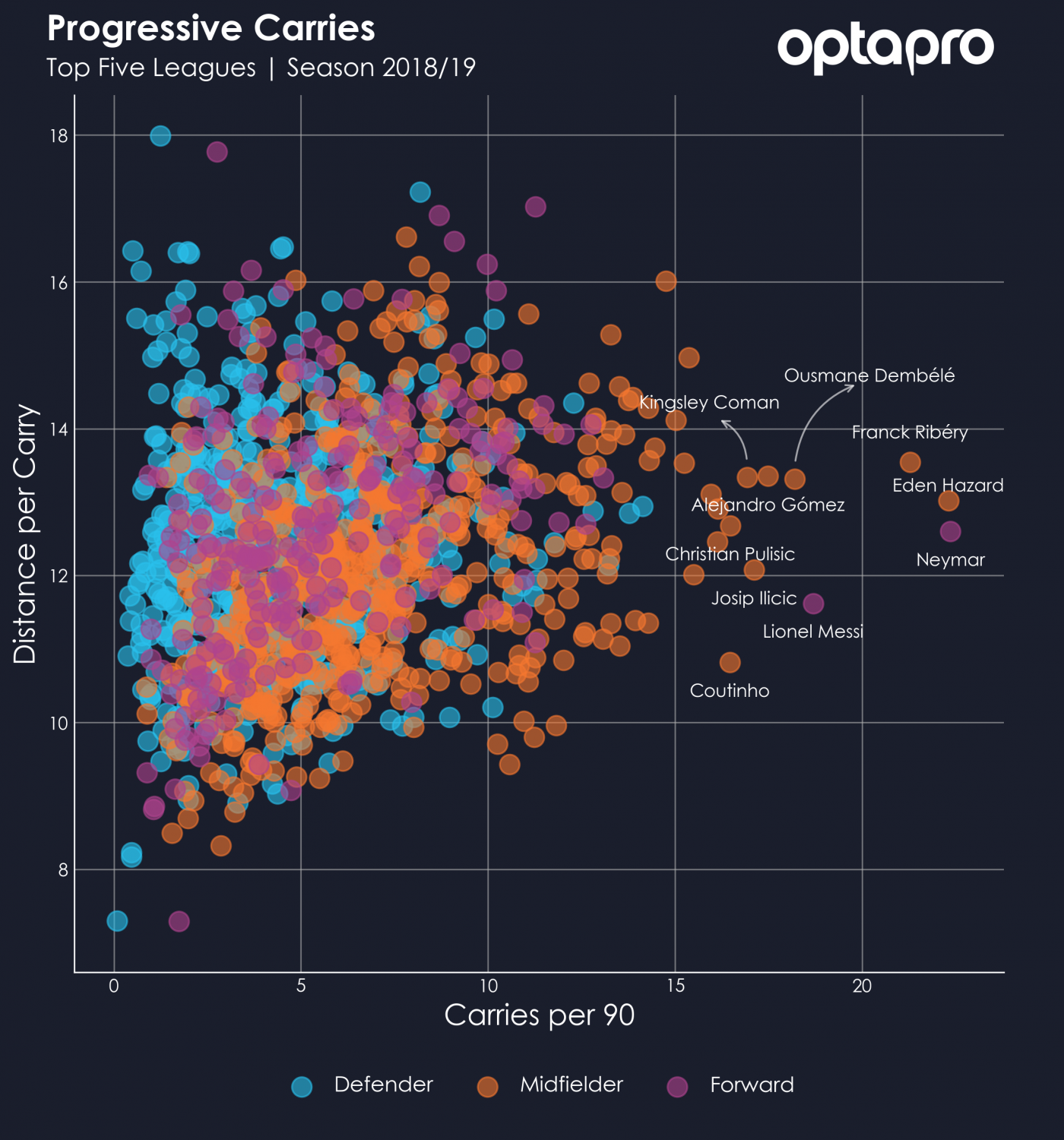 Looking at 2018/19 we see that Eden Hazard is by far the most prolific ball carrier in the Premier League, averaging just over 22 progressive carries per 90 minutes with an average distance of 13 metres per carry.

Going a step further, we can rank players by their attacking contributions for actions following a progressive carry.

The table below lists the attacking output for the top 20 players in the Premier League for 2018/19. The expected goals and expected assist numbers are for those shots and key passes that directly followed a progressive carry. 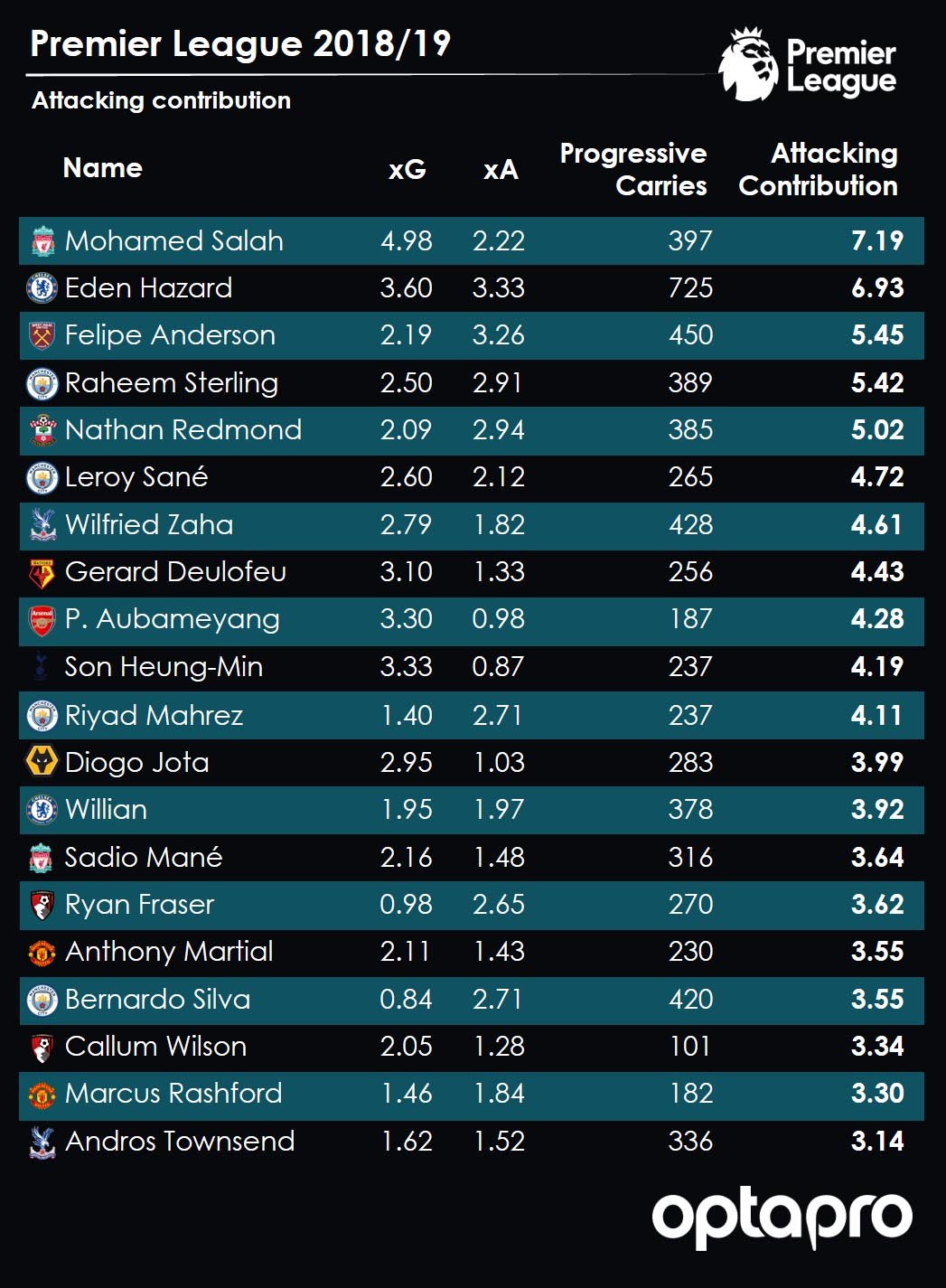 Looking at his pitch map we can see most of his progressive carries came from the right. 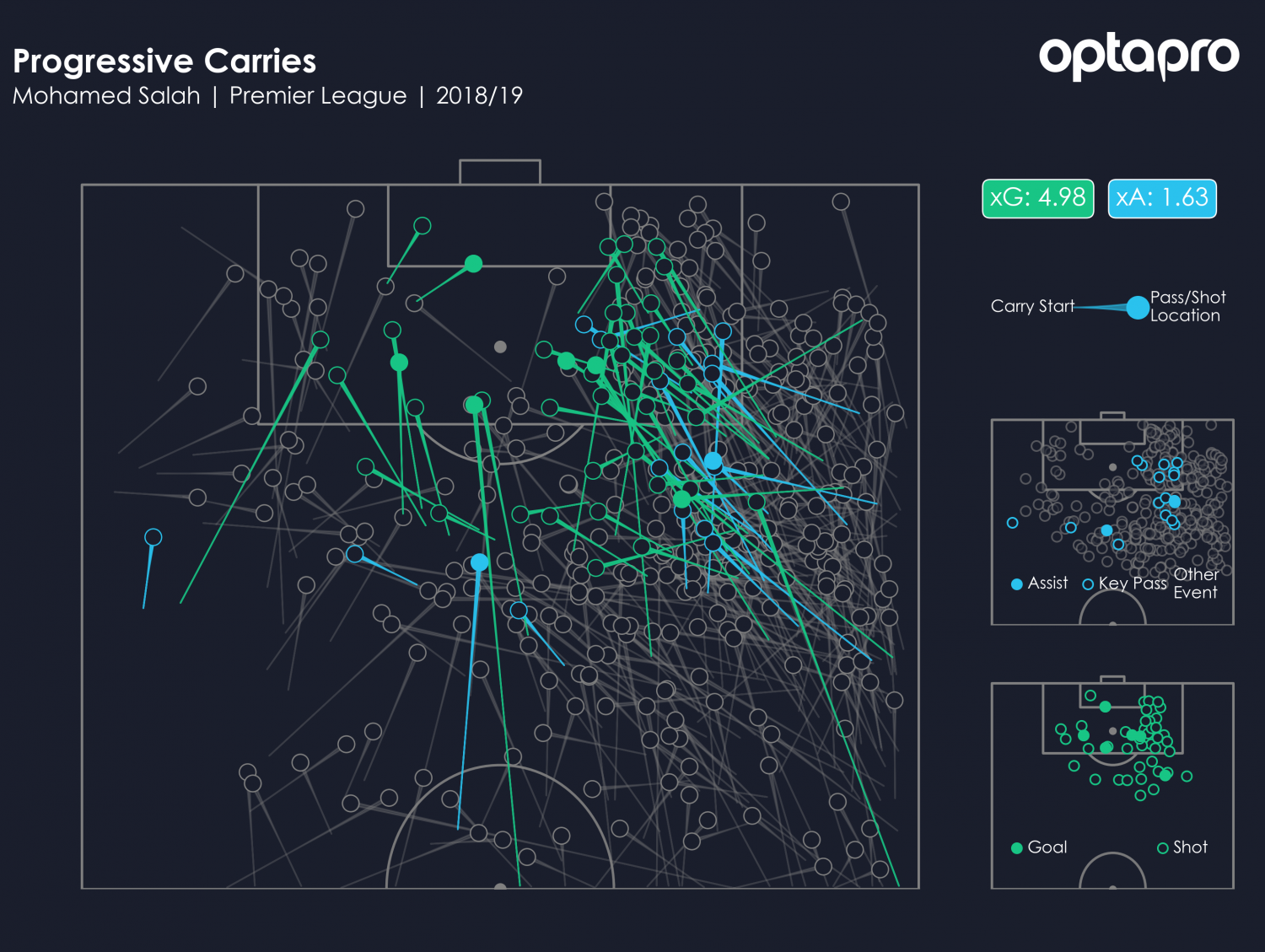 Highlighting just how dangerous the Egyptian can be on that right side, the majority of times he managed to carry the ball into the box, he got a shot away. From the smaller graphic in the bottom right-hand corner we can see his attempts cluster heavily on that right side of the box.

With Hazard now plying his trade in Madrid, it will be interesting to see how the rankings will stack up during the new season. Chelsea players may still feature heavily. Perhaps anticipating the departure of Hazard, Chelsea acquired the services of Christian Pulisic in January before immediately loaning him back to Borussia Dortmund.

While he did not feature heavily last season, looking at 2017/18 should give us a good insight into his carrying ability. In that season he ranked 6th in Europe’s top five leagues – just behind Hazard – for attacking contribution following progressive carries. 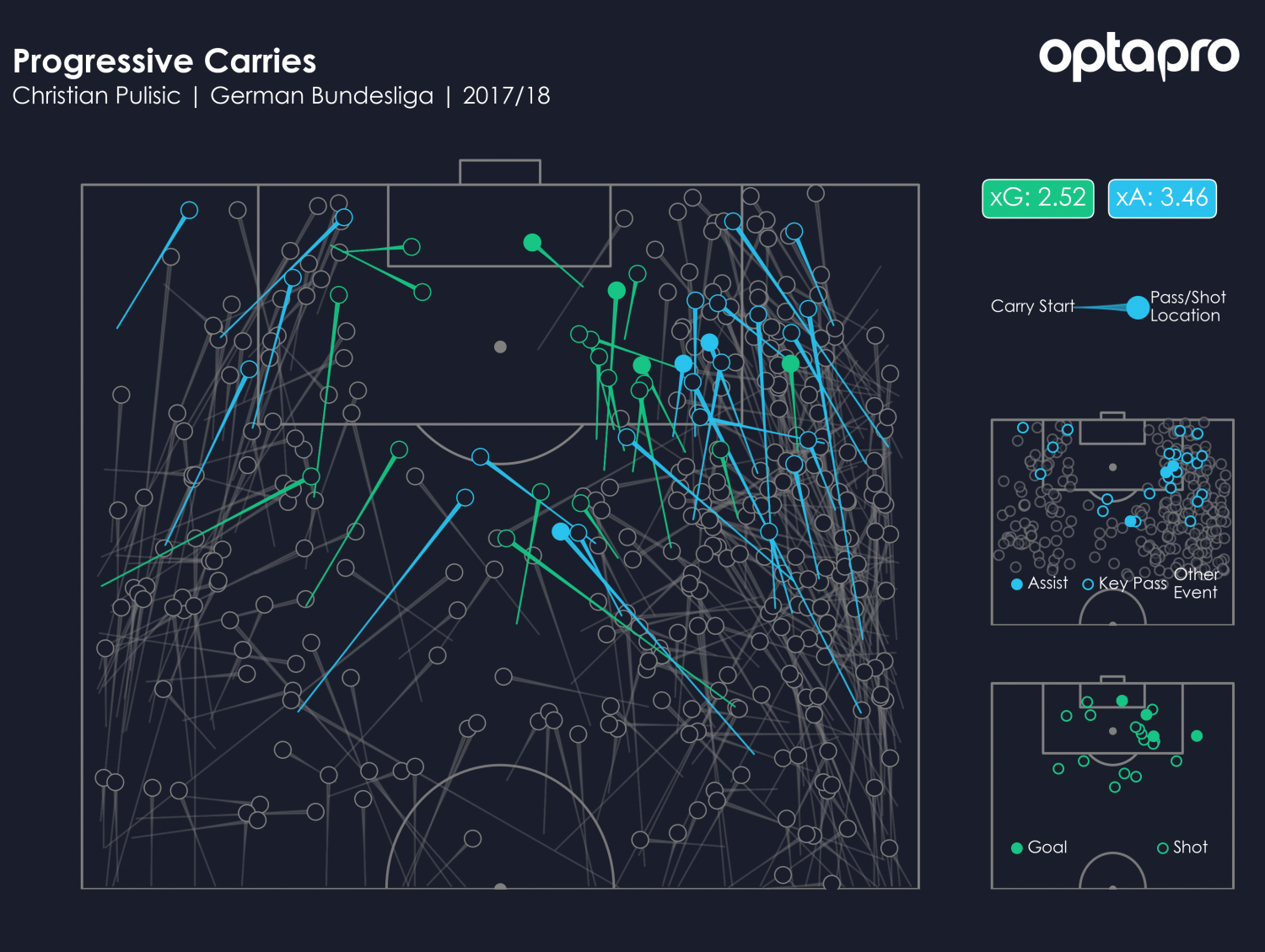 While playing on the opposite side, he has the profile of a player who – like Hazard – can make long ranging runs down the wing and attack the box. So in acquiring the 20-year old American, it appears that Chelsea possess a player who appears capable of replicating this aspect of Hazard’s game.