– In addition to field location, distance and angle, other factors incorporated into OptaPro’s goal-kicking probability model include the match venue and the skill of the kick-taker.

– With a success rate of 92% over the past two Super Rugby seasons, the top-rated kicker according to the model is Sunwolves fly-half Hayden Parker.

– Leigh Halfpenny attempts a higher proportion of difficult kicks than Wales teammate Dan Biggar. Halfpenny also has the highest conversion rate from these kicks of any player selected for the World Cup.

Kicks at goal can vary substantially in terms of their distance and angle to the posts, which will evidently have a knock-on effect on their difficulty. Across over 100,000 kicks from club and international competitions, the mean success rate stands at 73.5%. The easiest kicks close to and directly in front of the posts are converted 99% of the time, while around 38% of kicks from over the half-way line are successful.

Aside from location, another primary factor is the kick-taker; in raw percentage terms, of current players with more than 10 international caps and over 500 kicks at goal across their club and international career, the range in success rate is from 68.5% (Australia’s Quade Cooper) to 82.7% (Scotland’s Greig Laidlaw). Such raw percentages may well obscure the difficulty of the kicks taken – some players are known as long-range specialists and will take on more difficult kicks at goal, while others may be boosted by turning down such opportunities.

Furthermore, given players take a major fraction of their kicks at their home ground, local factors can also play a role; stadiums more open to the elements or at higher altitudes will see success rates fall or rise respectively and potentially manifest themselves in a player’s kicking record.

Overall success rates can therefore obscure player-skill levels, so building a model that factors in the difficulty of the kick can enlighten a number of areas. There is often a trade-off between goal-kicking ability, play-making and defensive fortitude, so such a model could be employed for recruitment and selection. Quantifying the difficulty of single kicks can enhance coverage and illustrate player performance over a match or tournament.

Previous work to model goal-kicking success rates has predominantly focussed on the spatial location of the kick i.e. the xy coordinates, distance and angle. In addition to these features, we explicitly include the identity of the kicker and the venue into a Bayesian modelling framework using PyMC3 to define a hierarchical Markov Chain Monte Carlo (MCMC) model. While the following focusses on the player-related skill element of our model, more details on the venue adjustments are included at the end of the article.

The core facet of the model is to estimate the difficulty of a kick while also factoring in the skill of the kick-taker; players that are routinely successful will be rated more highly, particularly should they consistently convert more challenging kicks.

With a success rate of 85% from the 350 kicks in our database and a staggering 92% over the past two Super Rugby seasons, the top-rated kicker according to the model is New Zealander, Hayden Parker. Parker’s rating of 2.2 indicates that he is more than twice as good as an ‘average’ kicker (a rating equal to 1). To illustrate Parker’s ability, we estimate that an average kicker would have a success rate of 72% from the kicks he has taken; when factoring in his ability, his expected rate stands at 83%, representing a huge increase compared to an average kicker. The discrepancy between his expected rate and his actual success rate likely reflects the model’s slight caution over his record as the sample size is relatively small compared to many of the kickers in our dataset. A sample of his kicking prowess can be seen below.

The SharpShooter Hayden Parker slots it from Wide out! Hasn’t missed in 2019 check this out! #WARvSUN #SSAction Great win for the @sunwolves pic.twitter.com/aEkwXUfa7a

The following table lists the top-rated kickers selected for the 2019 Rugby World Cup (RWC), as well as Parker, who is yet to be capped at senior level. Scotland’s Greig Laidlaw and Wales’ Leigh Halfpenny are the stand-outs, with the latter being marked out as taking on more difficult kicks than many of his peers.

Our player ratings take the mean of the Bayesian MCMC posterior samples, which comes with the added benefit of quantifying the uncertainty in our ratings. These uncertainties reflect both the modelling setup we have used, as well as the sample size for each kicker e.g. Uruguay’s Felipe Berchesi with only 100 kicks has a large uncertainty range of 1.3 about his central estimate, whereas England’s Owen Farrell’s rating is far more robust with a range of just 0.4 that is a consequence of having over 1400 kicks to judge his record.

The figure below highlights a number of players in the RWC squads, with each marker representing regular internationals over the past decade, as well as those to have featured in previous RWCs since 1987. Parker is included for comparison also. 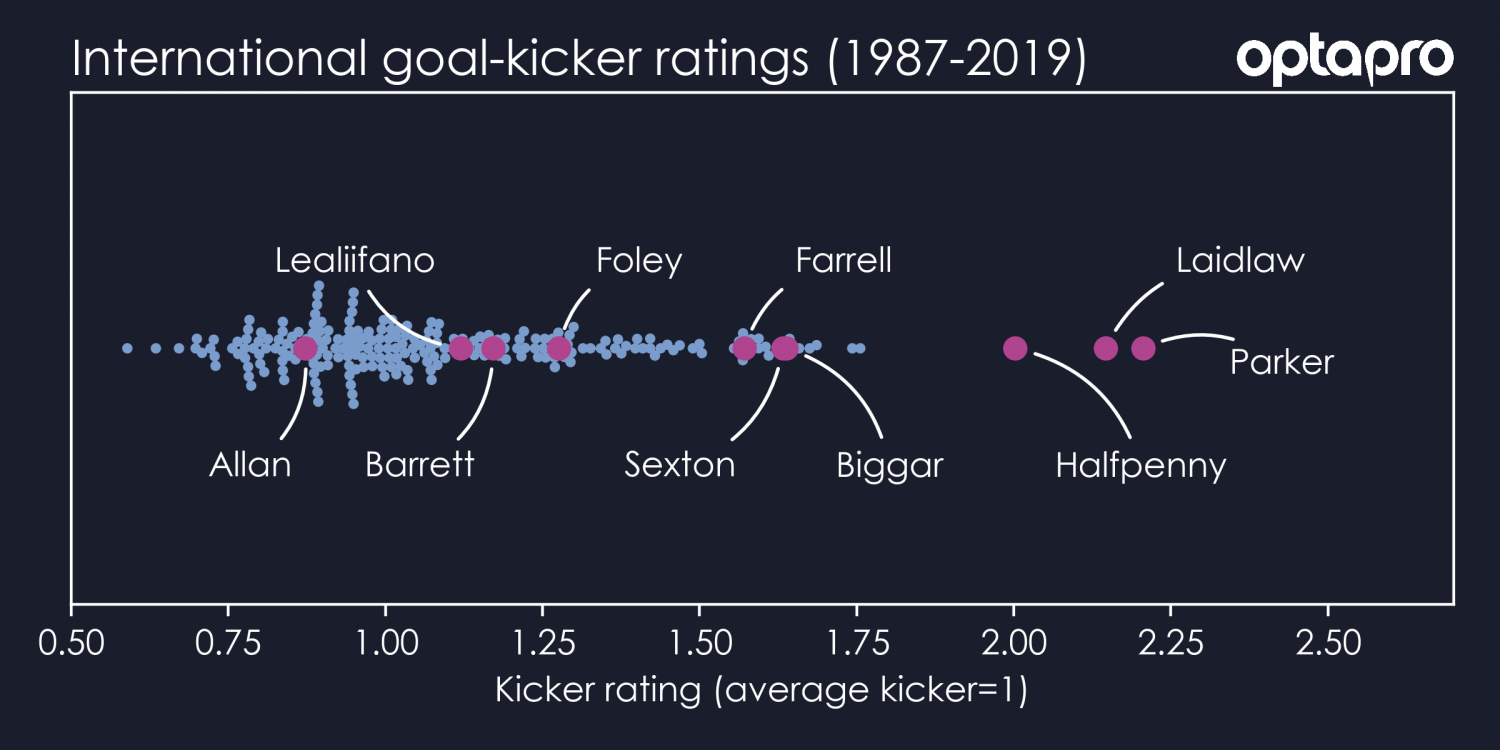 Aside from Italy, the Six Nations teams can all field excellent kickers, whereas those featuring for New Zealand and Australia have more modest records. From a pure goal-kicking perspective, this represents a potential edge for the major northern hemisphere nations going into the tournament that may be relevant in close-fought matches.

During Wales’ victorious Six Nations campaign earlier this year, Gareth Anscombe was the first-choice fly half and kick-taker, with the attacking skills of Liam Williams preferred at full-back. Anscombe has been ruled out of the RWC through injury, taking with him an excellent kicking record that would have seen him rated behind only Laidlaw and Halfpenny at the tournament. With a mean rating of 1.7 [1.4-2.0], Anscombe sits slightly ahead of his likely replacement at fly-half, Dan Biggar.

There is a degree of selection bias in the kicks taken by players that is honed through hours in training and experiencing the pressure of top-level matches – players will often only attempt kicks that they feel are within their ‘range’, thus turning down more difficult kicks at goal in favour of a set-piece restart. Biggar’s kicking record is excellent and comparable to Anscombe’s, but he does appear to be an example of a player who is more selective on his kicks relative to Anscombe, and especially Halfpenny.

To illustrate this, in the table below we focus on the most difficult tier of penalty-goal attempts, defining the most challenging as those with an expectation of less than 60%, which accounts for 37% of all penalties. 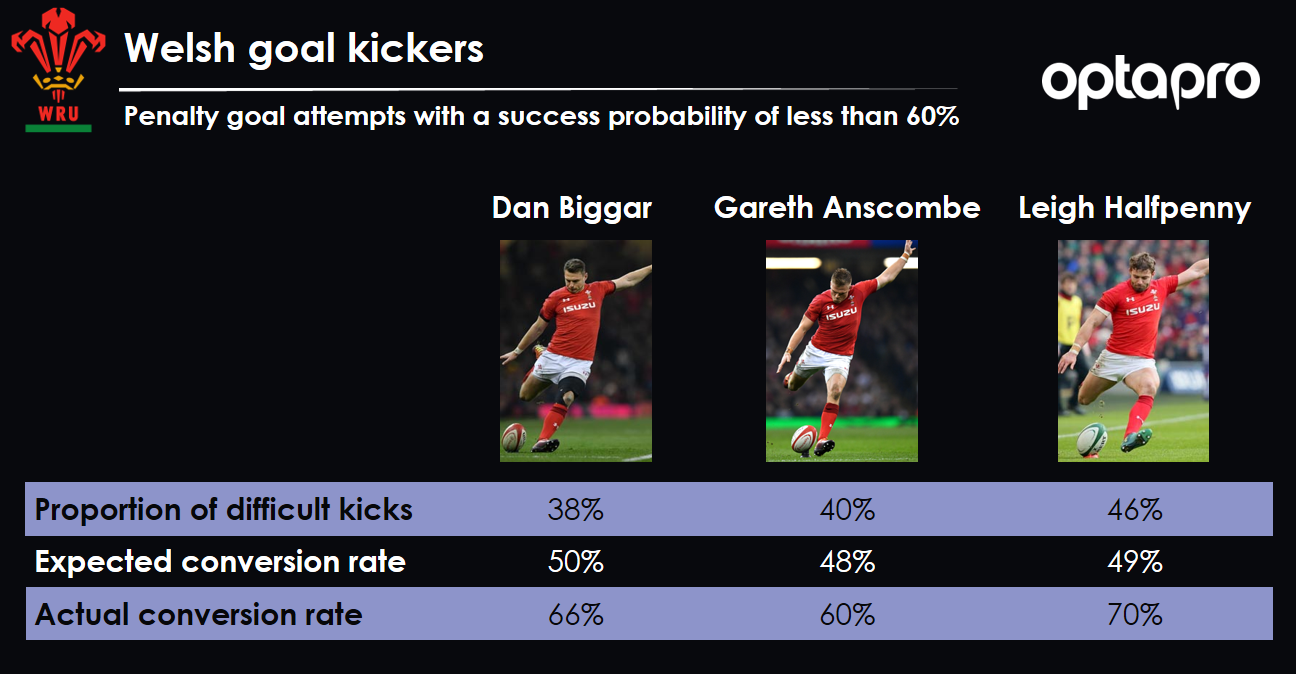 In Biggar’s case, his proportion of difficult kicks is slightly higher than the average proportion for all players but lower than Anscombe’s. Biggar’s record on such kicks is actually better than Anscombe’s by a good margin. Halfpenny’s penchant for long-distance kicks is well-merited given his astonishing conversion rate on such kicks of 70%, which is the highest success rate for players with over 100 kicks in our database.

Based on the above, Biggar could potentially elect to take on more difficult kicks than he is currently should the opportunity arise, assuming Halfpenny is not on the field. Given defence has been the bedrock of Wales’ recent success, efficiently utilising the long-distance goal-kicking abilities of Biggar and Halfpenny may be a prudent means of accumulating points and progression through the tournament.

The above illustrates the utility of quantifying both the base level difficulty of goal-kicking attempts, as well as isolating player ability. Selection and recruitment will clearly require a broad view of a players’ skillset, although given the fine margins in elite rugby, a skilled kicker can be the difference between success and failure.

Hayden Parker is the extreme example in terms of ability, but over the past two Super Rugby seasons, his 102 kicks at goal have yielded 230 points. An average kicker would have contributed approximately 182 points from the same kicks, illustrating the value of goal-kicking skill when it comes to the final scoreline.

A further consideration that affects the success rate is the venue – the variability of stadium designs, predominant weather conditions and in some cases, altitude can all have an impact. For example, open-sided stadiums may be subject to significant cross-winds or turbulent airflows that are a minor factor in modern large bowl-like stadiums, increasing the difficulty of the kick. In order to partially account for such potential impacts, we include the venue as a variable in the model. While such an adjustment will be unable to account for finer scale variations during a given match day, it does provide some additional context regarding the difficulty of a kick and the advantages or disadvantages regular kickers at such venues may experience.

For the vast majority of venues, the adjustments are negligible. Including such factors does however improve the performance of the model when conducting out-of-sample validation tests.

The most extreme venue in terms of increasing the difficulty of a kick is Eden Park in Auckland; the baseline expectation for all kicks at the venue is a 70% success rate for an average kicker – factoring in the venue reduces this to 66%, representing a relatively small but significant difference. Auckland’s coastal location is often associated with elevated and gusty wind conditions, which coupled with the irregular heights of the stadium’s stands will make conditions more challenging and unpredictable.

The flip-side in terms of venues is generally associated with high altitude locations where air density is lower and the drag is thus lowered, which will increase the distance that the ball can travel when all other factors are equal. The Toyata Stadium (also known as the Free State Stadium) in Bloemfontein is the most friendly environment for goal-kickers, with success rates boosted from 71% to 76% for an average kicker. The high altitude of almost 1400m, coupled with the more uniform stadium design makes it the rugby union equivalent of Denver’s Mile High Stadium in the NFL.