– OptaPro’s Possession Value (PV) framework establishes the probability of a team scoring from an individual possession.

Players who score goals and provide assists are key to any football team. However, focusing on these two metrics in isolation ignores all other actions on the pitch. For example, how are we supposed to properly assess the on-the-ball skills of a defensive midfielder if we disregard 99% of all the actions they make?

Ideally, we’d want to value all of a player’s actions. Do their actions make the team better or worse? Did they increase the likelihood of a team scoring goals, or winning matches?

In most cases, when rating central midfielders it is not particularly insightful to study their xG and xA outputs, since they are typically very low. Instead we look at other metrics, such as counts of ‘progressive’ passes or ‘final third entries’.

While there is a value to these metrics, they also miss a lot of information. You could compare it to using shots on goal when judging offensive players. In that scenario we’d also want to know how valuable the shot was. The same thing can be said of ‘final third entries’: how valuable was each final third entry?

In 2012, xG was introduced within applied football analytics to improve our assessment of how valuable shots are. This provided an improved way to judge attackers and their goalscoring abilities.

What if we could extend that, and put a value on every action on the pitch?

Establishing the likelihood of a goal being scored from a possession

Sometimes it is very clear if an action is positive — think of a pass that puts a striker through on goal, or an interception that wins possession.

For most actions though, it’s more nuanced than that.

The model is still in development and will evolve over the course of the 2019/20 season, driven by feedback from OptaPro clients.

Here is an example of how Possession Value is applied, focusing on a sequence of actions by Liverpool. The final event is a pass by James Milner. 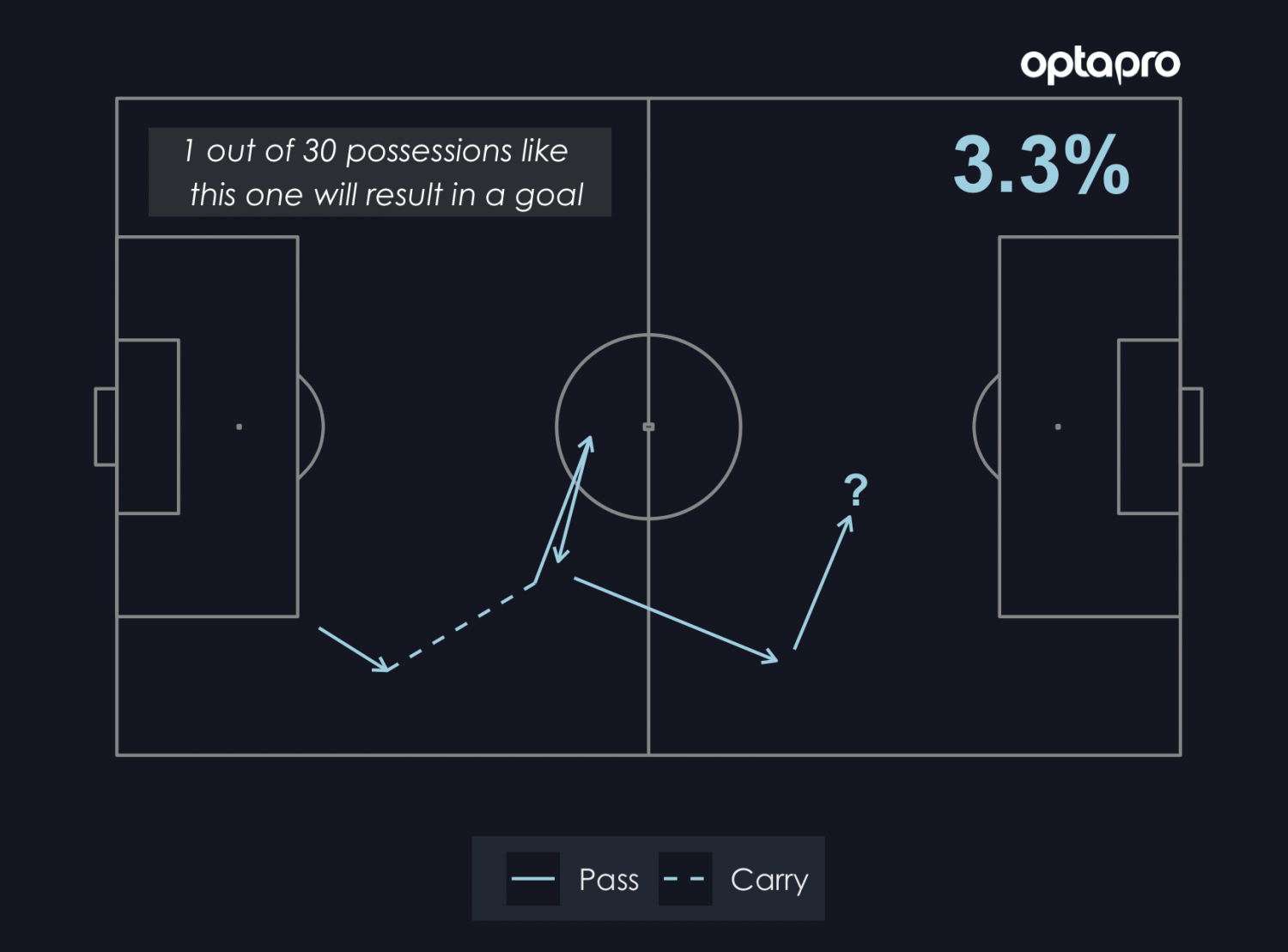 At this stage of the move, what is the likelihood that this possession will result in a goal? Remember, we are not concerned about how a goal is scored. A goal could be scored because the receiving player shoots and scores directly. Alternatively, a goal could be scored 20 touches later from a corner. As long as the team does not lose possession in the meantime, it counts. The likelihood of any goal occurring within the same possession is what the model estimates.

In this case, the model estimates the probability being 3.3%, or about one in 30. So how do we get to this number?

The model bases this estimation on up to five prior events within the same possession, as illustrated in the graphic above. It then compares it to historical data to try and estimate the likelihood of a goal occurring. Generally, the later an action occurs in the sequence, the more important it is considered. In this example this means the final pass by Milner has a larger influence than the pass that happened five actions before.

At this point you might be asking yourself ‘so what? – how does this help us attribute a value to all actions on the pitch?’

Well, let’s continue with the Liverpool example and look at the two actions which follow Milner’s pass: 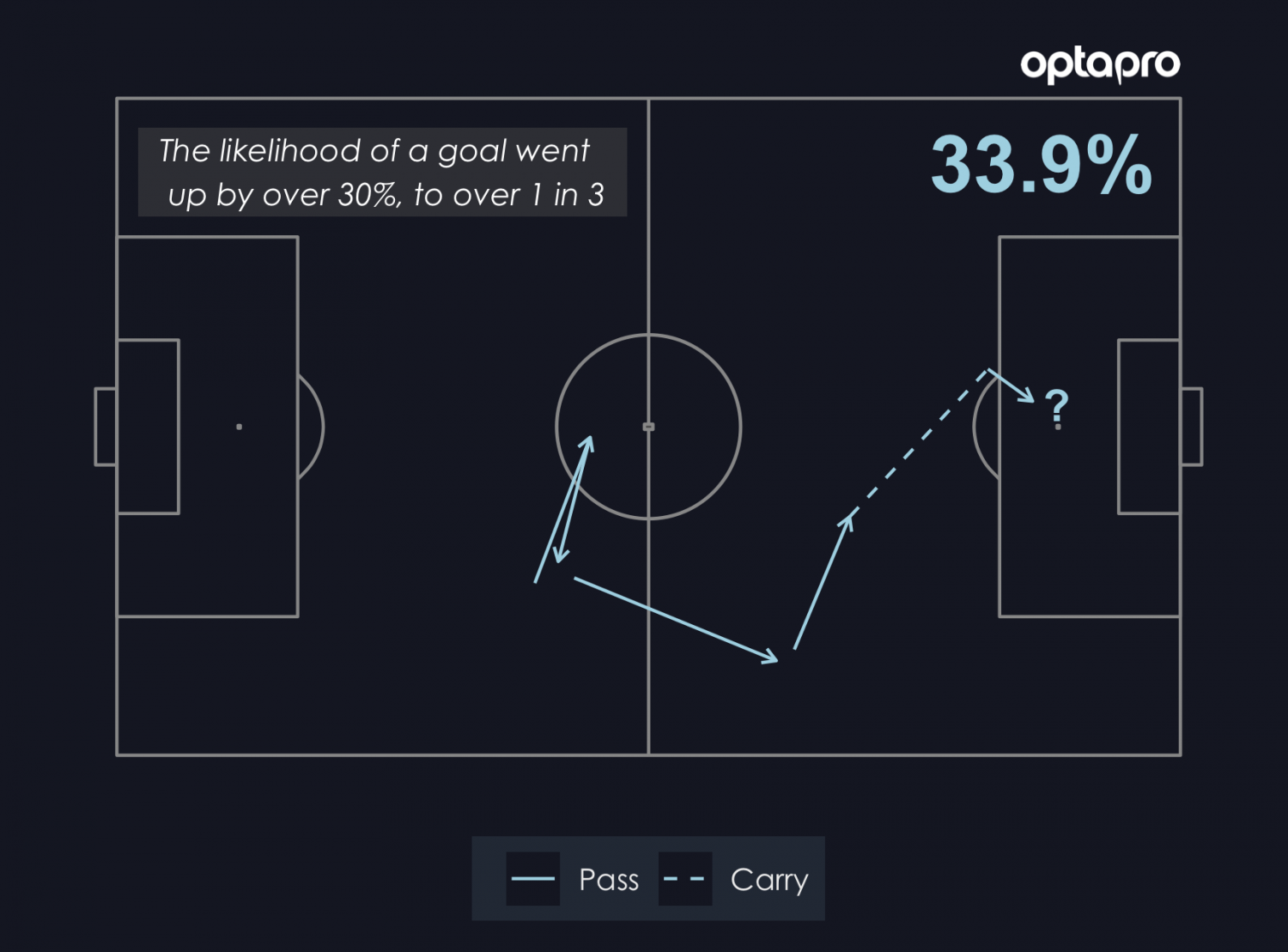 Firmino, after receiving the ball from Milner, carries the ball towards the box and then plays a successful through ball into the box to Sadio Mané. The model now estimates the likelihood of a goal occurring at 33.9%. In other words, the player making the action increased the likelihood of the team scoring by more than 30%. This is what we call Possession Value added (or PV+).

So by applying the Possession Value framework, we can value every action on the pitch by looking how it increases or decreases the likelihood of a team scoring.

Quantifying a player’s contribution to their team’s goal probability

Let’s take an example of an action where a player’s PV+ output has a positive contribution to a developing move, but does not generate either a high xG or xA value.

Arsenal’s Alexandre Lacazette receives the ball from a throw-in inside his own half, surrounded by opposition players. 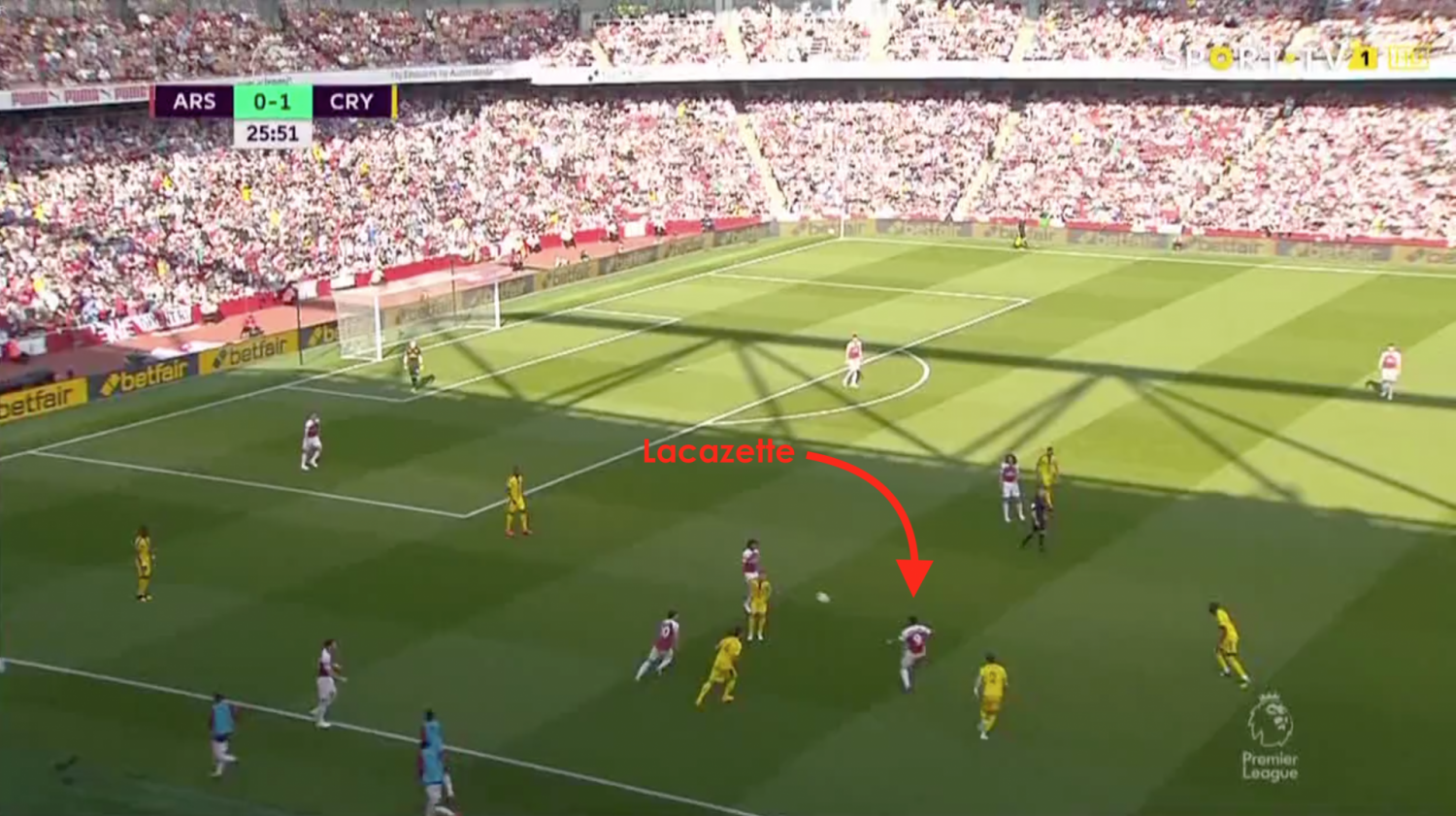 After receiving the ball and turning, the Frenchman carries the ball deep into the opposition half, so that just nine seconds later he is in this position to pass the ball to Kolašinac on the left. 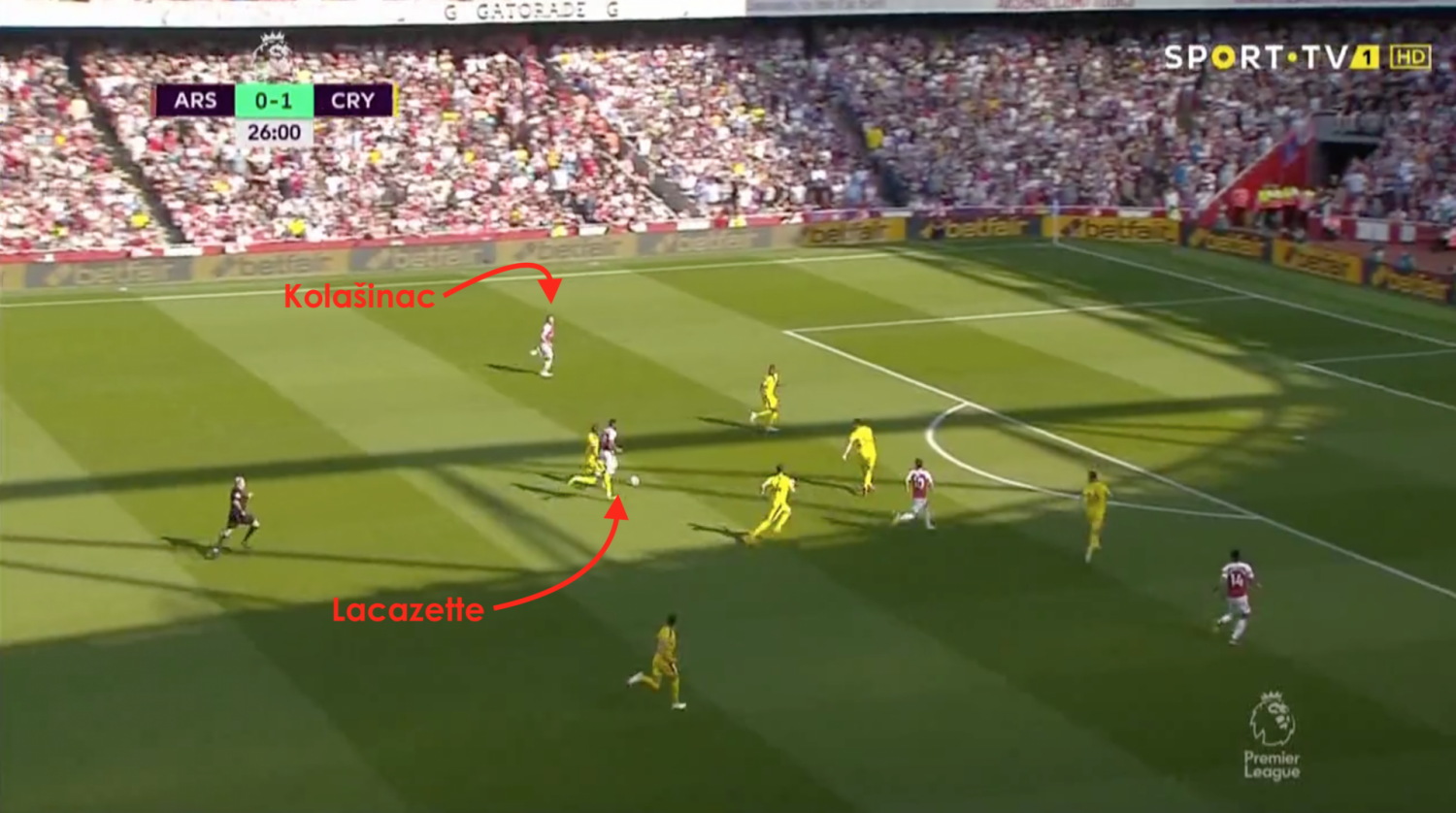 It’s pretty clear this is a valuable contribution to Arsenal’s attacking move, however Kolašinac delivers a poor cross which is headed behind by a defender for a corner.

Lacazette’s excellent work doesn’t show-up in xG, as no shot was taken, or xA, because it is unlikely Kolašinac will score himself from that position. However Lacazette’s PV+ provides a more accurate picture of his contribution.

When he receives the ball from the throw-in, the PV is about 1%, while at the end of his run it’s over 7%. Therefore, he generates a PV+ of 0.06, which is much more reflective of how valuable his involvement actually was.

The power of Possession Value is that we can do this for every relevant action on the pitch. Think: passes, carries, take-ons, interceptions, tackles and recoveries, or even winning fouls or winning corners – they can all be applied to the framework.

As well as making positive contributions in possession, turnovers are part and parcel of the game.

Losing possession of the ball is detrimental to your team in two ways: first of all, any value associated with your possession is now lost. Secondly, your opponent now has a potentially dangerous possession.

Both factors are taken into consideration by the PV framework when attributing a player’s negative involvement.

Let’s look at two different scenarios to see how this is applied:

Sokratis has the ball inside his own box. As he tries to play out from the back, Deulofeu intercepts his pass. 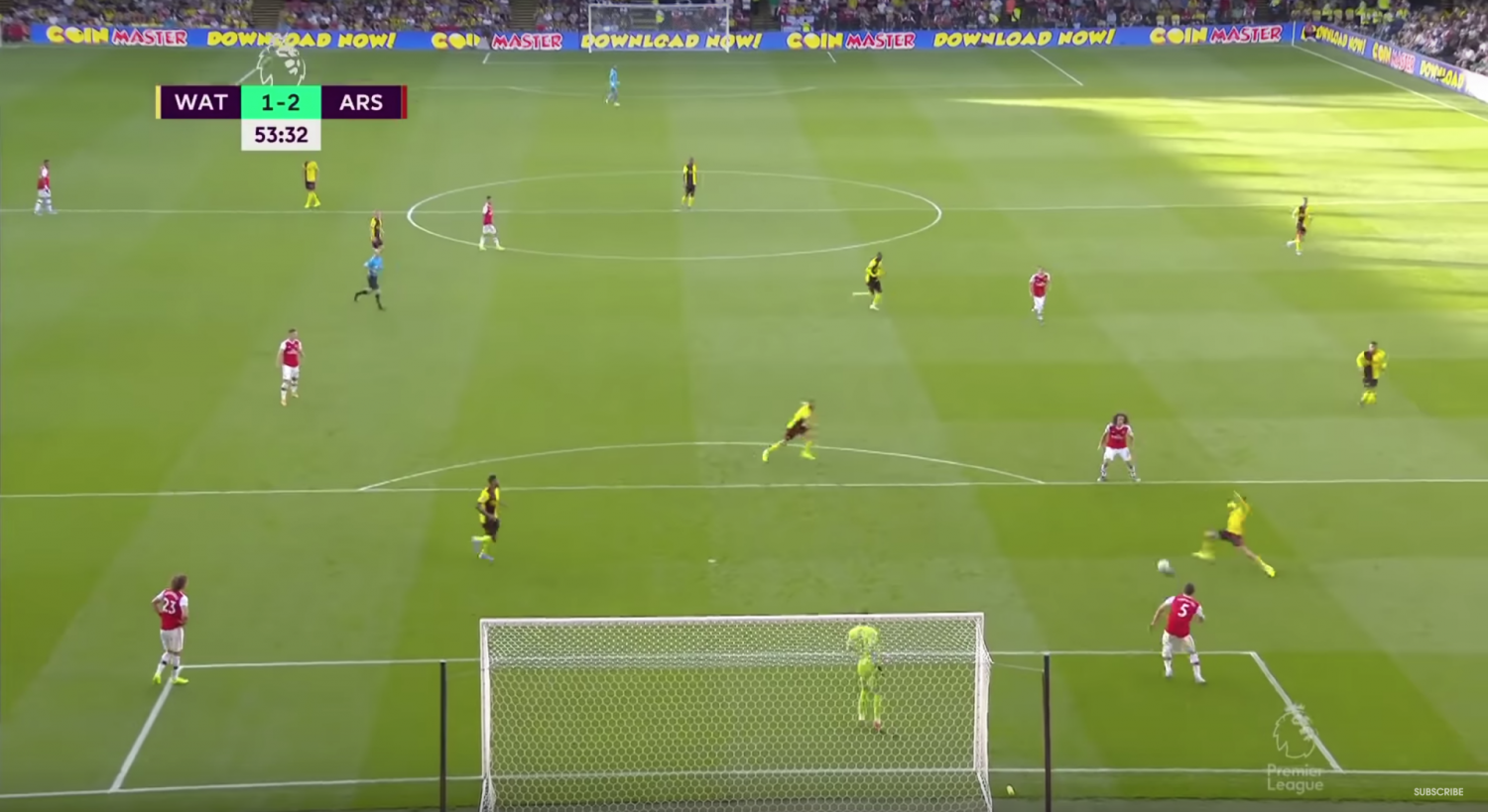 Crystal Palace are awarded a free kick just outside the box on the attacking left. 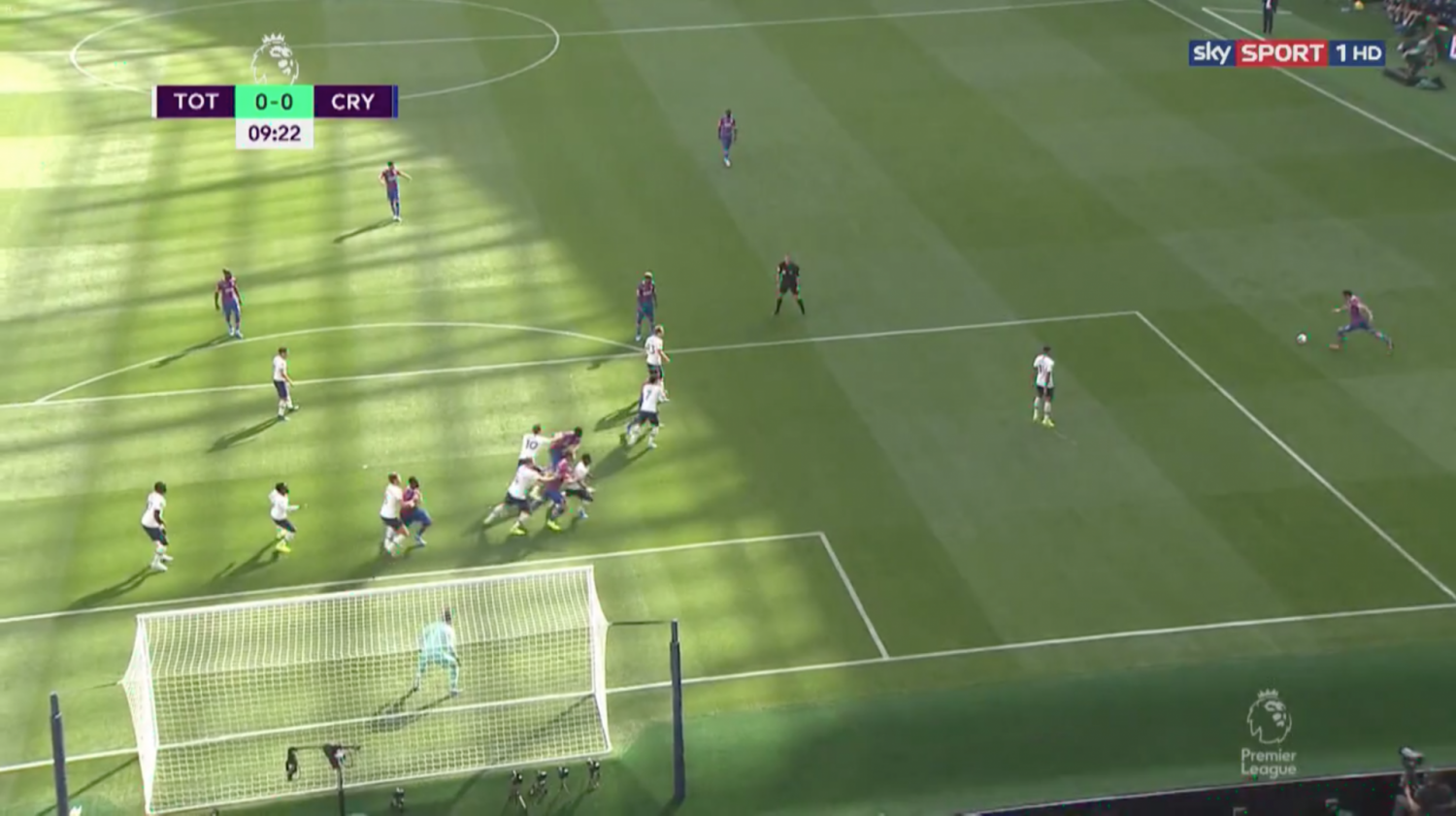 The free-kick is delivered to the back post, where Kouyate tries to pull it back. This is unsuccessful, and the ball is cleared.

Therefore, if we were to apply the same criteria here to the scenario involving Sokratis, Kouyate would be attributed -0.18 PV+. 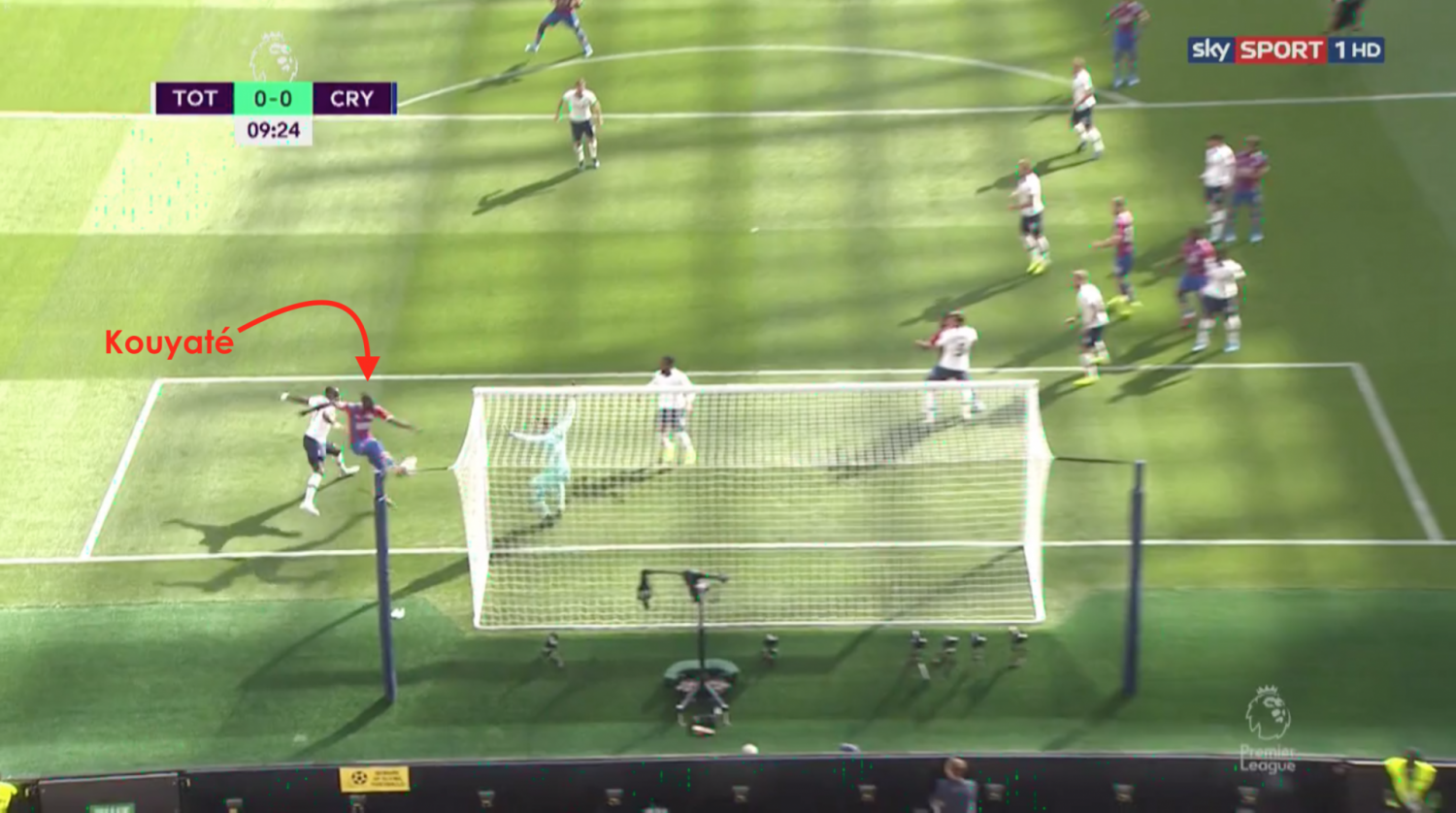 However the context of each scenario is vastly different. In the first example, it is clear that Sokratis’ individual error inside his own box directly results in a shift in PV, however in Kouyaté’s case, you could argue that several of his teammates are at fault by not being in a central position to receive his pull back.

When looking at preliminary results, we noticed a major negative influence on the scores for players who are often involved in attacking plays.

We believe it is crucial to assign blame and/or credit only where it’s due. Therefore, in our framework, the punishment for the loss of value of the possession is capped at 0.025 (the average value of a possession).

That means, in this example, Kouyaté is punished by –0.025 for the loss of value of his team’s possession, and –0.01 for the resulting danger of the opponent possession.

Attributing negative credit for losing the ball in this way still penalises attackers who are wasteful with the ball, but not unfairly.

To give you an idea of how this can help us identify stand-out performers, the table below lists the players recording the highest PV+ output per 90 for each team in the Premier League so far this season, however as a note of caution this is based on a somewhat small sample of matches played. The players are ordered based on current league table. 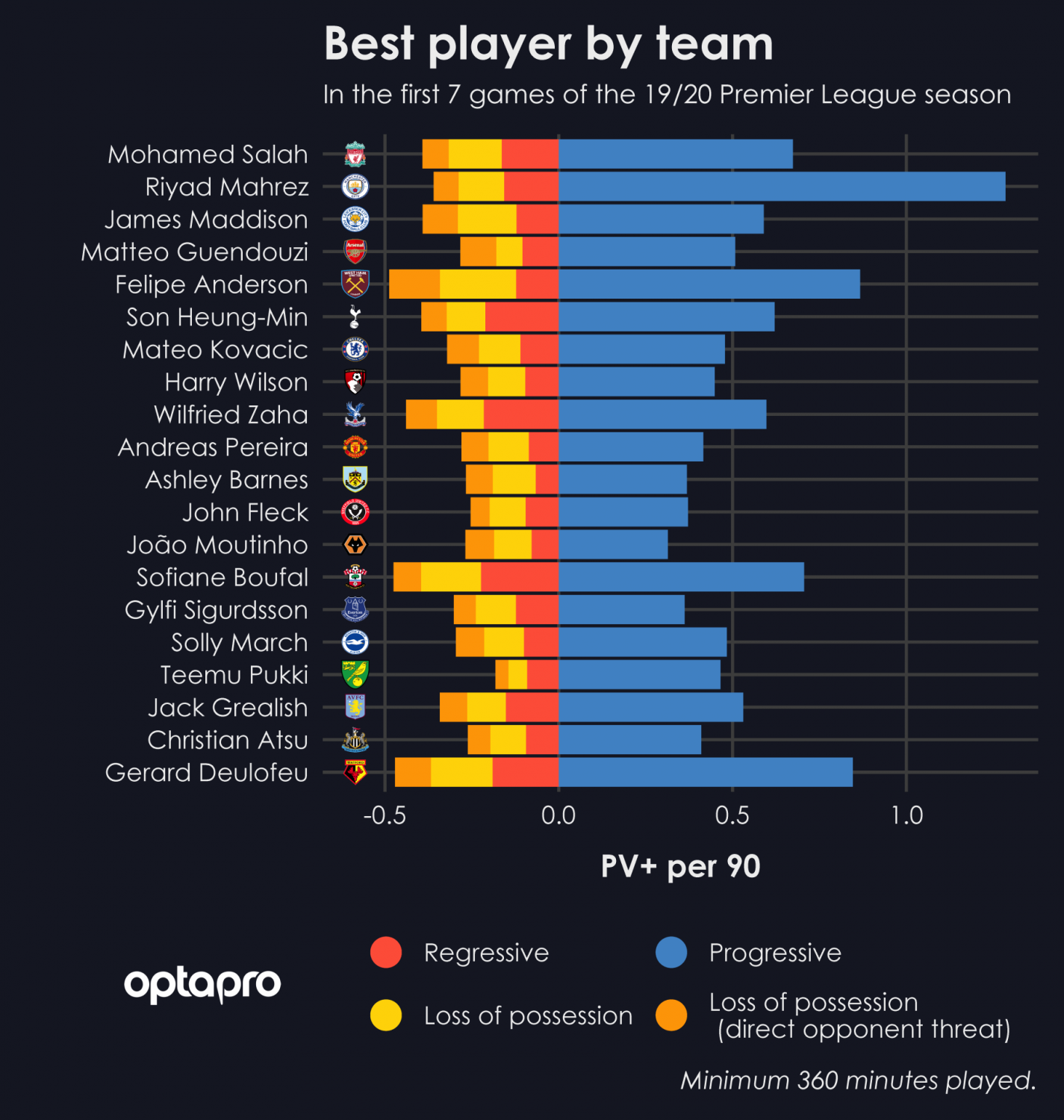 As you can see, the outputs are divided up into four categories, one positive and three negative:

(+) Progressive actions. These are actions with a positive PV+ and are highlighted in blue.

(-) Successful yet regressive actions. These are completed actions but are attributed a negative PV+, highlighted in red.

(-) Loss of possession leading to direct opponent threat (like the –0.14 PV+ for Sokratis).

Looking beyond shots and key passes

By applying Possession Value, teams can judge players based on all actions they make.

Complimenting existing advanced metrics devised to help identify underlying performance in front of goal (xG) and the quality of passes made in the final third (xA), PV enables us to put a value on all the on-the-ball skills of defensive midfielders and defenders, or even quantify the actual value of key defensive contributions, such as N’Golo Kanté’s interceptions.

As outlined earlier in the article, OptaPro’s Possessions Value framework is still being refined and further information will be shared as it is evolved over the course of the season.

If you would like to know more about the model or have any questions relating to what we have developed so far, please do get in touch with us at pro@optasports.com

In our next blog, we will provide further examples of how PV can be applied to inform performance analysis and recruitment, highlighting other useful metrics that can be derived from this framework.