– This analysis quantifies how deep-lying midfield players can help drive a team’s attacking play through sideways or backward passes.

– Although 46% of Jorginho’s actions for Chelsea were ‘regressive’ last season, 29 sequences involving his regressive actions ended in a goal, ranking him in Europe’s top 20 midfielders.

A role that is growing in popularity in modern football is that of a deep-lying playmaker, whose primary responsibility is to maintain possession and dictate the tempo of the game.

However despite often being at the heart of their team’s efforts in possession, these players are often subject to criticism for not making enough progressive, incisive passes.

Through applying Stats Perform’s new Possession Value (PV) framework, we can now demonstrate how important these players are in retaining possession and moving the ball into teammates who can progress with it.

A big advocate of this deep-lying playmaker role is Maurizio Sarri. Having enjoyed success in Italy with Napoli, Sarri moved to Chelsea and brought with him his key man, Jorginho.

In a recruitment context, we can use the PV framework as a tool to profile emerging playmakers – to get a better understanding of young midfielders who possess similar enabling traits to players like Jorginho.

Despite facing criticism during his first season at Chelsea, no one can deny how important Jorginho was to Chelsea’s new style of play. Operating in a deep-lying playmaker role in a 4-3-3 formation, Jorginho was involved in 44% of Chelsea’s open play sequences in the Premier league (adjusted for playing time), a larger proportion than any other midfielder. 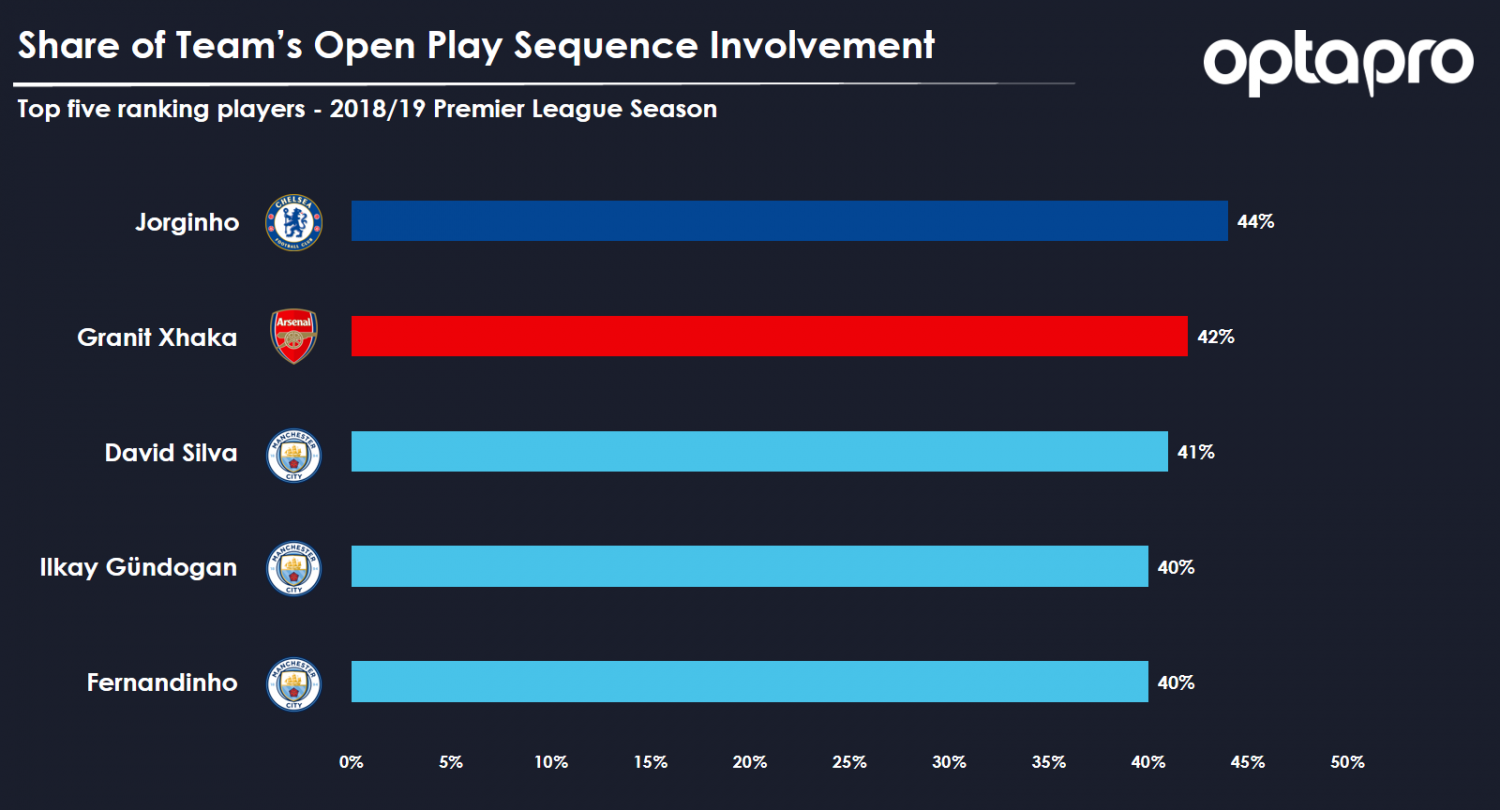 You can see an example of this dependency below, with the passing network for Chelsea’s game against West Ham. This is the match where he broke the record for the most attempted passes in a Premier League game (180). In total he was involved in a staggering 64% of Chelsea’s open play sequences and was a key outlet for almost every player in his team. 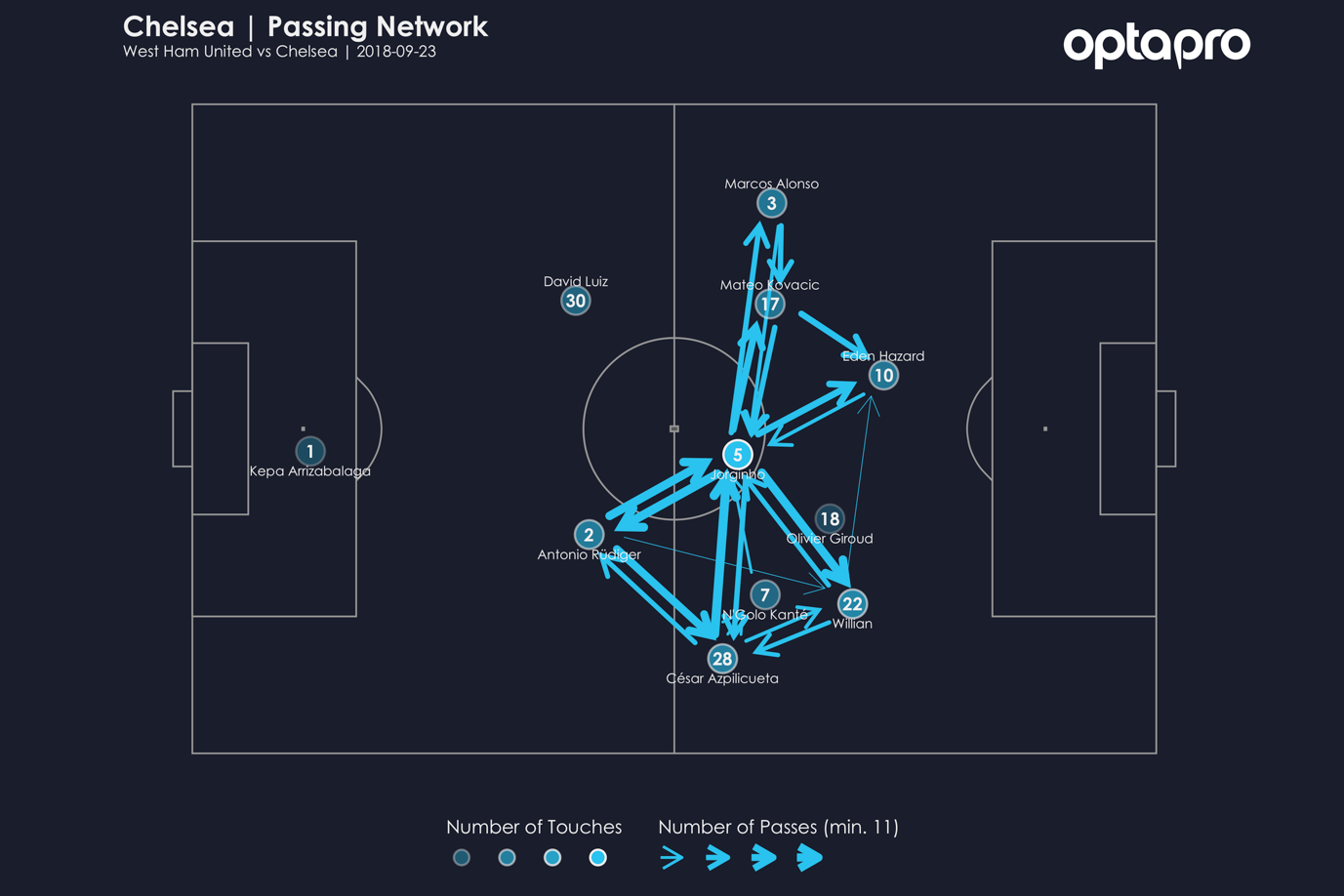 While everyone recognises that the Italian possesses a brilliant and composed passing ability, a common criticism of him is that he plays too many safe and unproductive passes.

Rio Ferdinand voiced his opinion on him after Chelsea’s defeat against Arsenal last season:

The fact that Jorginho didn’t record a single assist in the 2018/19 Premier League season was often raised to back up points like this. This is perhaps not reflective of his underlying performances, with his expected assists total of 5.2 for the season suggesting that his passes should have been converted into more goals.

“Jorginho is very able to move the ball, to build up the action, but Jorginho usually plays at 40-45m from the opposition goal, so it’s impossible for him to make the last pass.”

Despite not directly assisting a goal, Jorginho was actually involved in the build-up to more shot-ending sequences (145) than anyone in Europe’s top leagues last season.

To see just how effective Jorginho was in his role, we can look at the ball retention of midfielders from their passing in the middle third of the pitch.

Successful ball retention is defined as being when your team keeps possession of the ball following your pass, which can be complete or incomplete. For example, Jorginho may have attempted a pass down the line that is kicked out of play by the defending full back. While the pass is incomplete, Chelsea would retain possession of the ball with the resulting throw in. 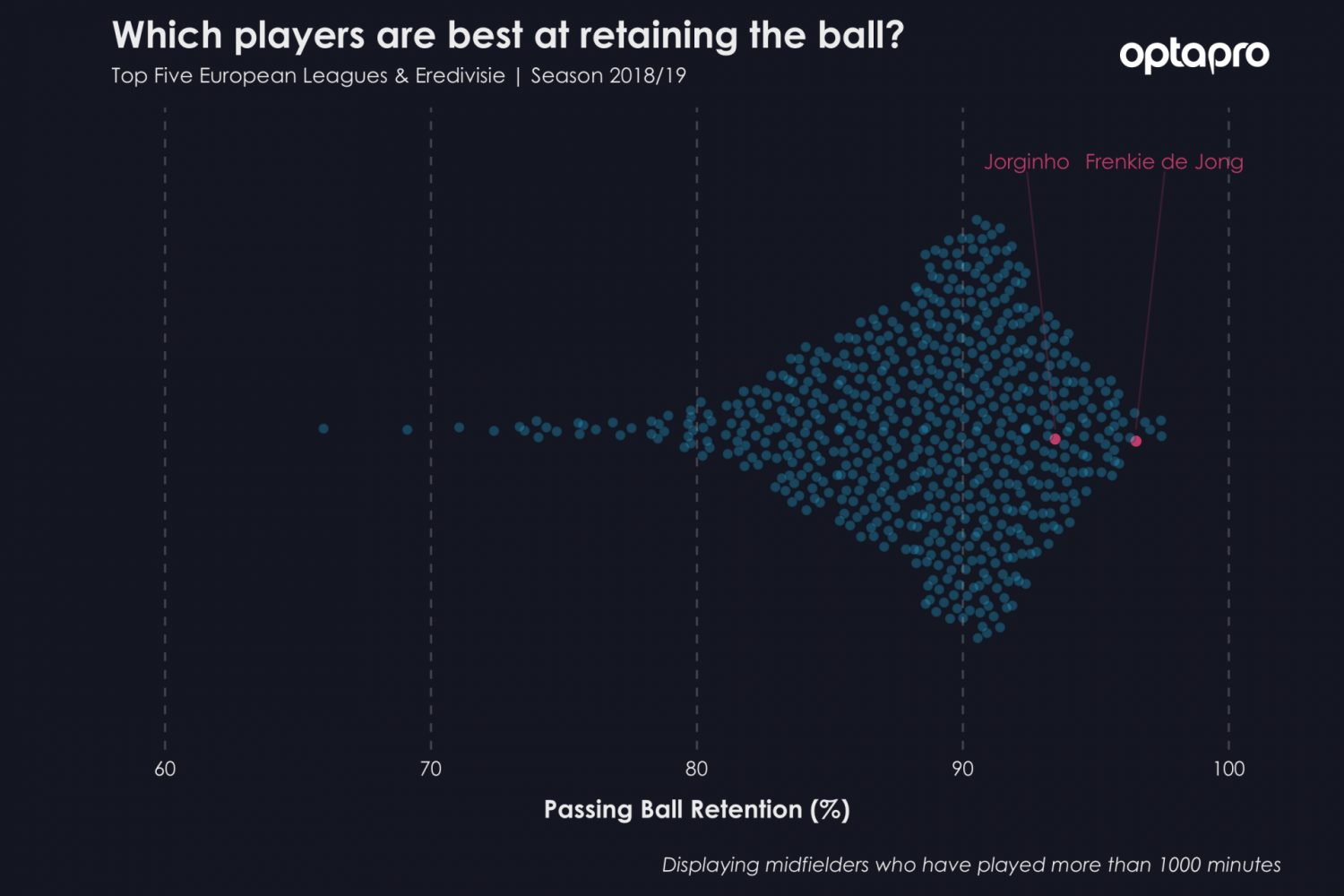 Despite a remarkably high ball retention of over 93% for someone who attempted more passes (1945) than anyone in Europe’s top leagues last season, many will point to the fact these were often simple sideways or backwards passes.

While this may be true, this is not necessarily a bad thing.

Using Possession Value (PV), we can take a closer look at his actions and how they influence the probability of his team scoring from a particular possession. For example, a ‘regressive’ action under this framework is one that actually reduces this likelihood of scoring.

We find that more than 46% of Jorginho’s actions last season were ‘regressive’ and that he made more regressive actions than anyone else in Europe’s top leagues (902).

Although a large proportion of Jorginho’s actions are ‘regressive’ in nature, his role in Chelsea’s team was largely to retain possession and in doing so, enable his teammates to progress the ball. This was demonstrated with 29 of the sequences involving his regressive actions ending in a goal, ranking him amongst the top 20 midfielders in Europe.

The important distinction here is that while an individual action may be ‘regressive’ and reduce the likelihood of scoring from that possession, the same action may give their teammates more time or space to make a progressive action soon after. We can use the PV framework to look into this further.

We can apply the framework to quantify how a sideways or backward pass may help drive an attacking move.

Passing backwards to go forwards isn’t a new concept within football, and now we can look to quantify how effective this is by using one of our metrics called PV Future.  Essentially, PV Future allows us to assign credit to an action based on what happened next in a possession sequence.

The scatter chart below highlights the relationship between ball retention and PV Future for passes by midfielders in the middle third of pitch. It allows us to see how safe players are with possession but also how well they are enabling their teammates to progress the ball. 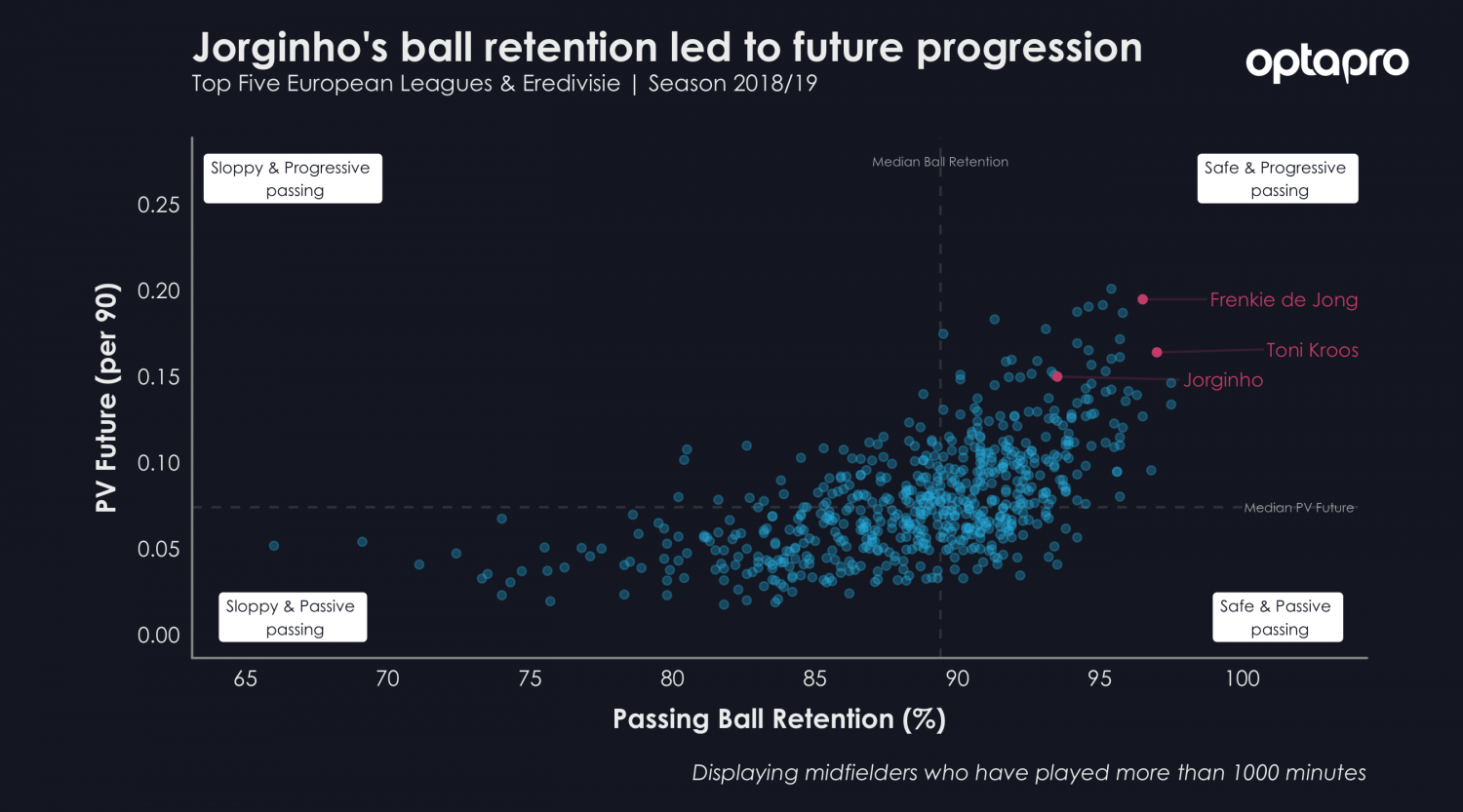 We can see here that while Jorginho’s retains the ball well, he also facilitates progressive play following his passes.

Similar to other top ball playing midfielders across Europe, such as Frenkie de Jong and Toni Kroos, it is an indication that although they may be retaining the ball with largely ‘regressive’ passes, they are still having a positive impact on the likelihood of their team scoring later in that possession.

Who else can do this?

Using clustering methods to find similar players to Jorginho last season and limiting our search to players under the age of 23, we find that the most similar player from Europe’s top leagues was Ajax’s Frenkie de Jong.

While this matches the eye test, we want to find realistic targets for teams who may not have the purchasing power of De Jong’s new club, Barcelona. After filtering out these unrealistic targets, we find three particularly impressive players who fit the mould – PSV’s Pablo Rosario (22 years old), AZ Alkmaar’s Teun Koopmeiners (21 years old) and Lyon’s Houssem Aouar (21 years old).

All three players dictate their team’s play in a similar way to Jorginho – getting involved in 32-37% of their respective team’s open play sequences. As shown in the graphic below, their heavy involvement is also supplemented by their ability to retain and enable future progression of the ball. 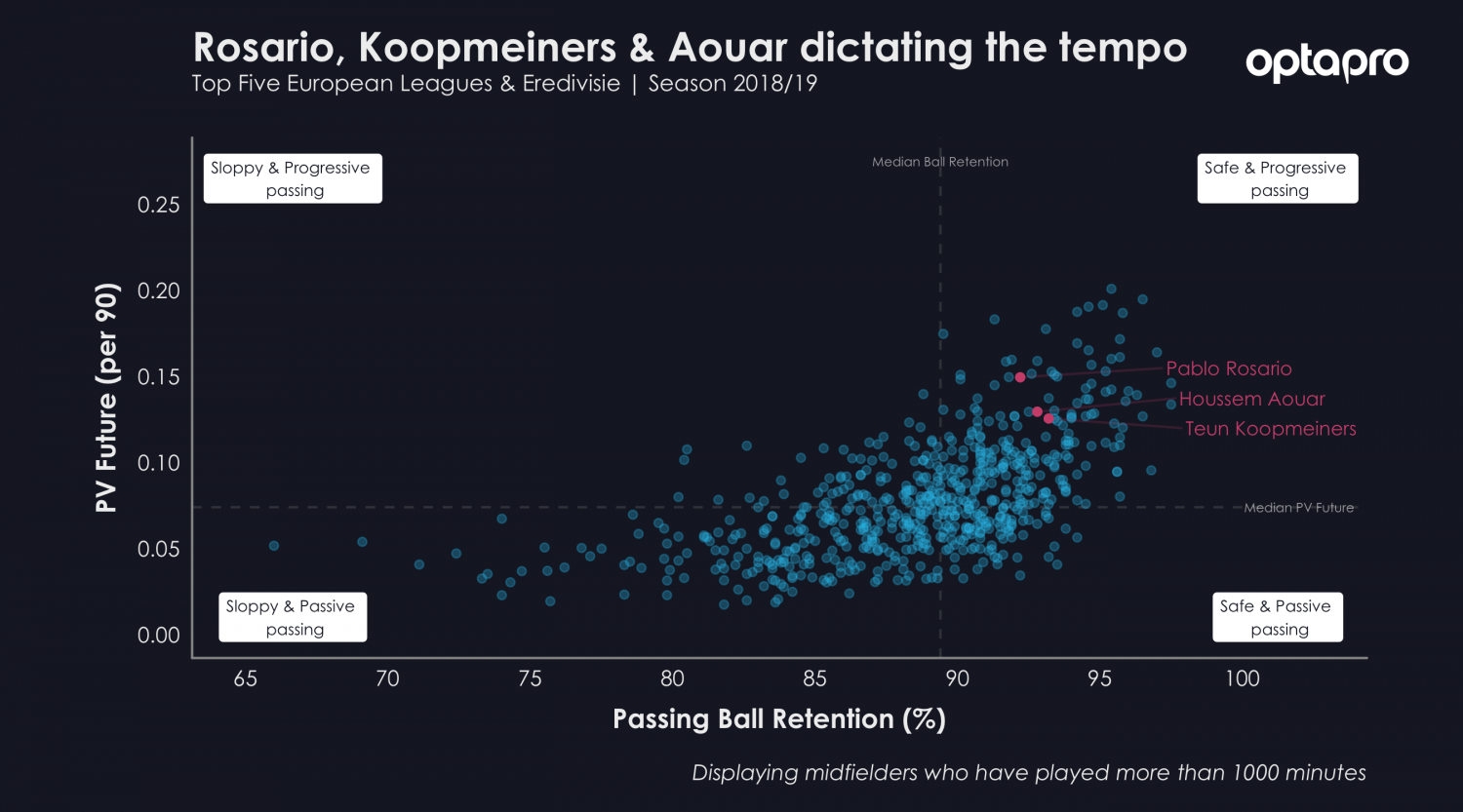 This trio’s ability to dictate play for their teams at such a young age makes them exciting prospects for any clubs on the lookout for a new deep-lying midfield playmaker.