– In possession, Birmingham spent the longest proportion of time in build-up of any WSL team during 2018/19.

– When she was on the field, Lucy Staniforth created nearly 25% of all Birmingham’s chances, reinforcing the importance of her remaining with the Blues for this campaign.

Following the surge in interest in the women’s game during this summer’s World Cup, a highly anticipated new WSL season kicks off this weekend.

Last season Arsenal stormed their way to the title, winning 18 of their 20 matches whilst Birmingham City enjoyed a successful season despite a change of management midway through the campaign, finishing fourth. A detailed review of the full 2018/19 WSL season, published earlier this week, is available here.

Since the end of the season, each club has had contrasting summers. Whilst Arsenal have bolstered their squad with new recruits, Birmingham find themselves without 10 key players following their departures from the club.

Based on their performances during last year’s campaign, OptaPro takes a look at how key changes over the summer could impact the way these teams play this season.

Based on expected goals per shot, Arsenal created the best quality shooting locations in WSL last season. The graphic below illustrates a considerable gap between Arsenal, Manchester City, Liverpool and the rest of the competition. 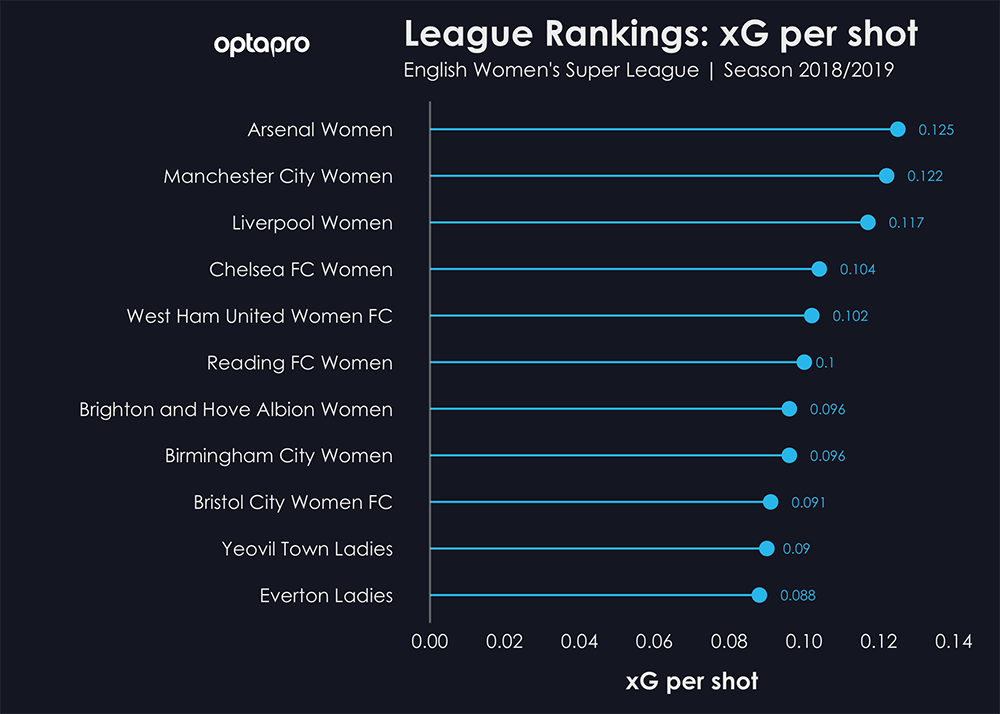 Taking a closer look at the underlying performances of the league’s leading scorers also provides further insight into the quality of finishing of Arsenal’s Vivianne Miedema. Despite recording a lower xG per shot than Manchester City’s Nikita Parris and Chelsea’s Beth England, she exceeded her xG output by over seven goals, with over 95% of her goals coming from inside the opposition box.

The accuracy of her finishing is also reflected in her xGOT output (a metric which takes the end location of a shot into consideration), which gave her a SGA (‘shooting goals added’) value of 1.3. More details on xGOT is available here.

Unsurprisingly, Arsenal and Manchester City dominate the leaderboard with Beth England being a standalone for Chelsea. Daniella Van De Donk’s inclusion is noteworthy, as her xG per shot value (0.19) highlights her ability to get into high-quality shooting locations from central midfield.

As highlighted by her shot map below, she attempted a low volume of low-probability attempts from outside the box, whilst also being very effective at getting into the 6-yard box, where 70% of her non-penalty goals occurred. Miedema’s shot map also reinforces how she was largely successful in converting her chances within central areas of the 18-yard box.

Building from the backline

Birmingham only managed to score 29 times during the 18/19 campaign, a total significantly lower than the three teams finishing above them. What kept them competitive however, was their ability to keep goals out, conceding just 17 times.  Birmingham were only one of two WSL teams to concede fewer goals than their xG projection.

OptaPro’s Phases of Play framework provides further insight into Birmingham’s playing style last season. As highlighted by the graphic below, they spent 39% of their total possession time in the build-up phase, which is categorised as being in controlled possession of the ball in their own half before crossing the halfway line. No other WSL team spent a higher proportion of time in the build-up phase.

At the other end of the pitch, only relegated Yeovil spent less time in the attacking phase, which indicates that while Birmingham were able to keep the ball in build-up, they struggled to progress the ball into dangerous areas. 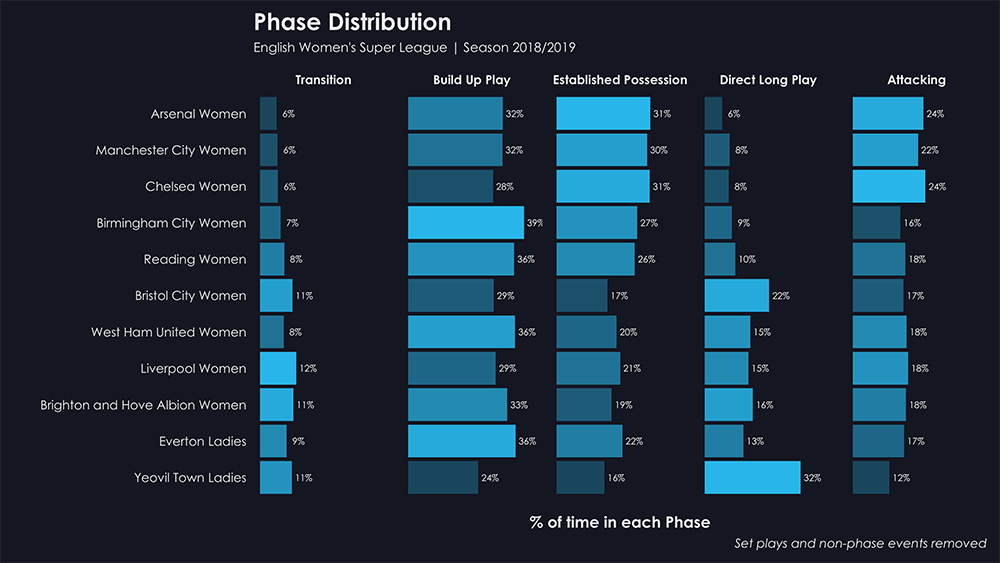 Birmingham’s relatively cautious approach was also reflected in the direct speed of their sequences (1.20 m/s), which was the slowest in the league.

The influence of Mannion in possession

Aoife Mannion played an integral role at the back for the Blues last season, playing every minute of every game. Mannion’s impressive WSL season secured her a move to Manchester City and her first Lionesses call up over the summer.

Using Phases of Play we also get an insight into how important Mannion was in starting off possession moves for Birmingham last season. No other player in last season’s WSL moved their team out of transition more times than Mannion, who did it 10 times per 90. 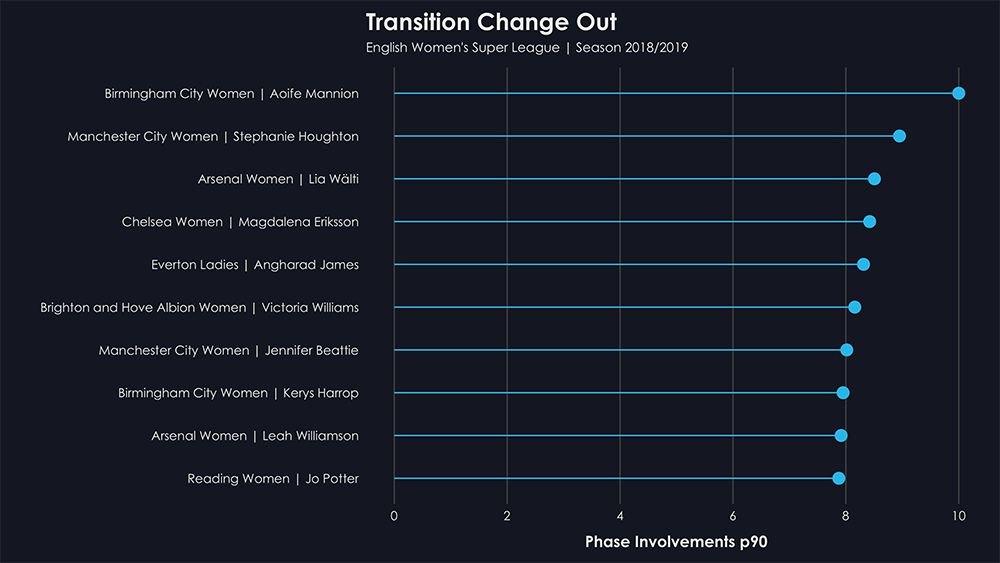 When Mannion was in possession, she moved Birmingham into the build-up phase 7.2 times per 90, which again ranked her first in WSL. In losing the 23-year-old to Manchester City, either Kerys Harrop or new signing Adrienne Jordan will have to take the responsibility of dictating possession from the back if they are to retain the same playing style in 2019/20. 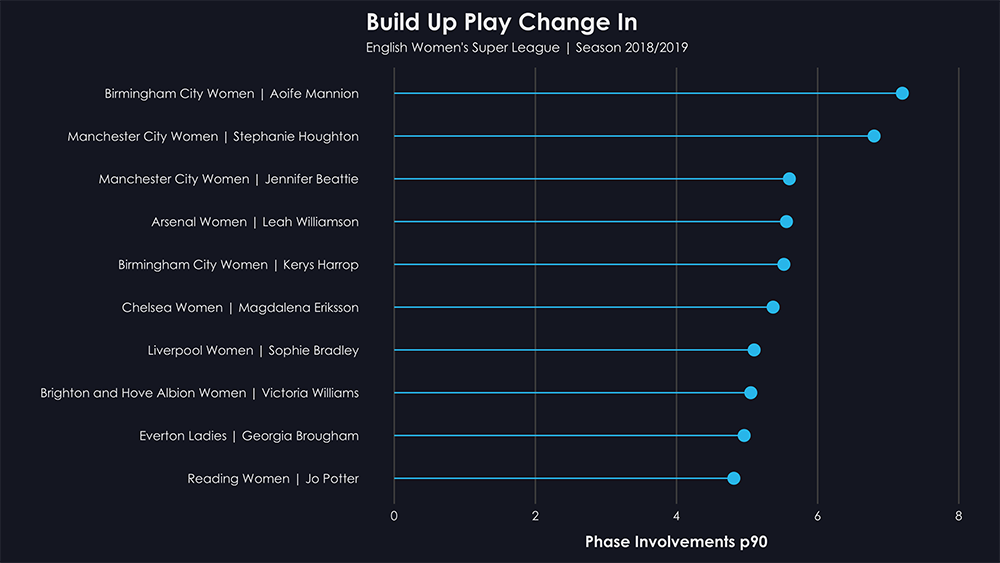 Whilst Mannion wasn’t afraid to use the long ball as well (she moved her team into the direct long play phase more than any other player in the league), she found great success in shorter punch passes to feet, in front of the opposition’s backline, with the most frequent recipient being Lucy Staniforth. This passing lane was integral to Blues’ attacking play and getting the ball into Staniforth without Mannion will be one of their primary challenges for the new campaign.

Before injury ruled her out of the World Cup, Jordan Nobbs’ all-round contribution to Arsenal’s attacking play was considerable. In addition to scoring on average over one goal per game, she was involved in 4.47 goal ending sequences from her 7.9 nineties, which ranked her second in the league. She also topped the WSL rankings for xA output per 90 (0.32).

Whilst Arsenal’s success last season occurred in her absence, the 26-year-old’s imminent return could provide an opportunity for Arsenal to be even stronger this season going forward.

Another key creative player in Arsenal’s side was Beth Mead, who contributed 12 assists during the season. The graphic below shows her key chances created, with the majority coming from the inside left channel. In total Mead created 3.1 chances per 90, and with teammate Katie McCabe also creating 1.5 chances per 90, this reinforces Arsenal’s strength and volume of activity down this wing.

Instead of opting for a crossing strategy in wide areas, Arsenal’s play in the attacking third shows consistency in finding the spaces in between the 6-yard line and the 18-yard line before making a pass to create a chance. Across the season, Arsenal not only made 122.9 passes per 90 in their attacking third (the most of any team), but they also showed the greatest accuracy in pass completion (69.6%), highlighting their patience in waiting for the right opportunity to shoot.

From Birmingham’s perspective, one player who has remained this summer is Lucy Staniforth. Based on her contributions in 2018/19, that has been vitally important. When she was on the pitch she was creating nearly 25% of all their chances. 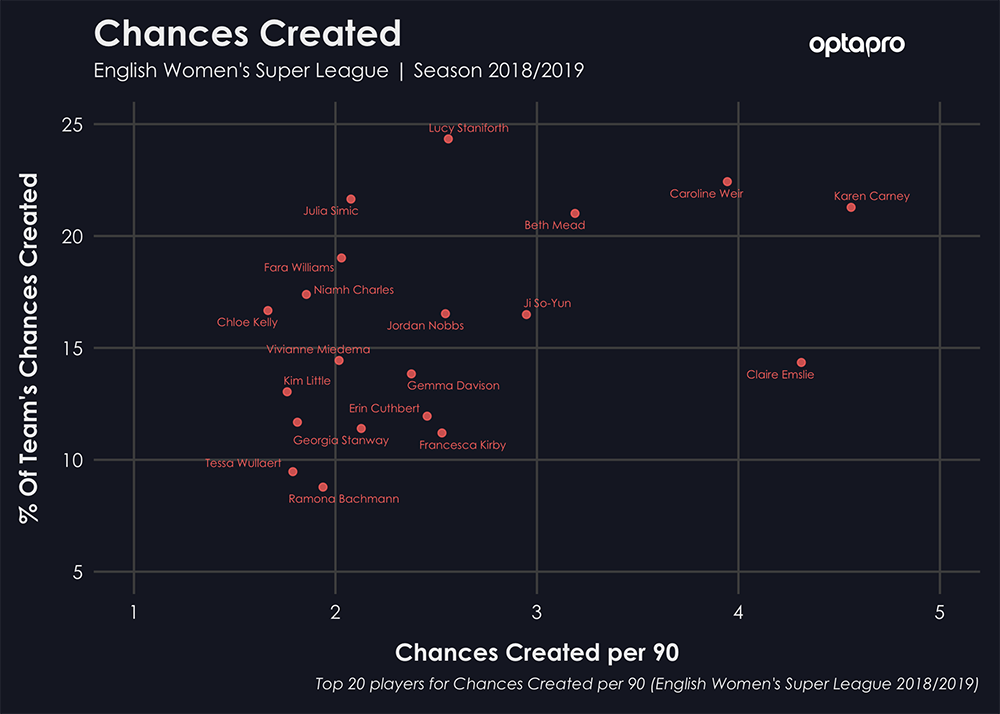 A lot of Staniforth’s key passes last season came from central areas, and she was often effective at creating chances when receiving the ball in pockets between the opposition’s midfield and defensive line. This signifies how fundamental Staniforth’s creative instinct is to the Blues.

Having been able to retain the core of their title-winning squad, Arsenal can look to build on last season’s success. Alongside Dutch forward Jill Noord, Arsenal manager Joe Monterrumo has brought in some defensive additions and with Nobbs’ imminent return, they will also benefit from her industry and creativity in midfield.

Blues however, have been forced into a re-build. They have recruited Brianna Visalli, a midfielder who impressed last year in Matt Beard’s West Ham side. A proven creative player, who created 0.9 chances per 90 and was successful in over 60.6% of her take-ons last season, she will likely operate alongside Staniforth in central midfield.

However having lost key defenders Mannion, Sargeant and Paige Williams from left back, Kerys Harrop will have to an important role to play, both defensively and in building up possession in a new-look back line, unless of course Marta Tejedor is planning to completely overhaul the playing style she inherited from Marc Skinner.

Birmingham have also lost Ellen White to Manchester City, who scored six times in just eight appearances in 2018/19. Her direct replacement could well be summer signing Lucy Whipp, who featured in 20 games during Everton’s 2014 WSL season before heading across to the States where she played competitively for St. John’s University.

Crucially however, they have been able to retain Lucy Staniforth, their most creative player. Ensuring that the supply line into her is maintained, between the opposition’s midfield and defensive lines, could be key to their 2019/20 campaign.